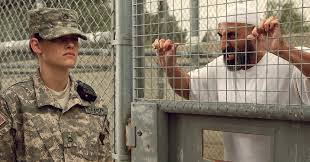 I have spent most of Kristen Stewarts career hating her. I think that for the most part, she is a female version of Keanu Reeves, except much more mundane and therefore much worse. She never seems happy about anything, in front of the camera or not. I don't think she had very much talent, and I thought "Twilight" was the worst possible way to make a splash in show-business. What "Camp X-Ray" proves though, is that with each artist, you have to take their efforts film by film. You will never, ever know when somebody might surprise you.

Kristen Stewart plays Private Cole in "Camp X-Ray," and we get a look through her eyes of what it is like at Guantanamo Bay, eight years after 9/11. Not only do we see what it is like as a soldier working at such a military base, but we also see what it is like as a woman being a soldier, working at that military base. For first time in her career, Kristen Stewart looks as if she has complete control of her craft. For the first time ever, she is not stumbling upon the set half-asleep, looking as if she just took in a major bong hit. She makes Private Cole very human, and it is brilliantly crafted work. She seems completely energized by the role that first-time director Peter Sattler has given her, and she allows herself to let loose creatively. It is also with much hope that Kristen Stewart is just one of the many wonders "Camp X-Ray" offers.

During the movie Private Cole forms an unlikely bond with an detainee Ali (they tell us in the movie why these people are referred to as detainees and not prisoners), a man who has been incarnated at Gitmo for eight years. As the film begins, we watch Ali walk through his apartment room before he captured and handed over to Gitmo, bruised and bloodied. It is interesting how the film doesn't completely paint Ali in a positive light, "Camp X-Ray" isn't mere liberal propaganda. We only get glimpses inside Ali's apartment and we never really find out what he was involved in, if anything. Ali is brought to magnificent life by Payman Maadi. I am unfamiliar with the work of Maadi, but right away, I want to see him in more movies to come. Maadi and Stewart create a effortless chemistry and anchors the entire film.

Like I said above, "Camp X-Ray" is not liberal propaganda, nor is it conservative propaganda. Too many times in Hollywood, it seems that directors feel pressed to chose a side of the political spectrum before they can tell their story. What Peter Sattler does is much riskier, he dares to tell a story that represents both sides of this debate. Both Kristen Stewart and Payman Maadi work as spokespersons for each side, and the movie tells a very human story with this idea. Yes, the movie is political, but it never throws its message in your face. I hate movies that try to shove political rhetoric down my throat, and "Camp X-Ray" never once does that. Instead, it studies both sides and tries to allow the audience come up with the solutions on their own. Its a bold move, especially for a first time director, and I think overall, Sattler does well.

I don't think that "Camp X-Ray" will change the way we view the War or Terrorism. I don't think this movie can really stack up against something like "The Hurt Locker." But "Camp X-Ray" passes as a good thinking exercise. That is mainly due in part by a great performance by Kristen Stewart, and I think viewers will be shocked its even her to begin with. The way I have described this film, I bet you think you have this one figured out. I thought I did too, this film is full of surprises and features quite the message. Give it a try and see what you think.

﻿FINAL GRADE: B
Posted by Shawn Hoelscher at 9:14 PM