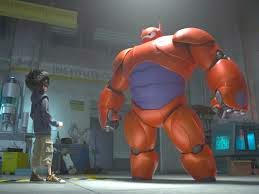 "Big Hero 6" is the first animated Marvel movie from Disney. If it keeps bringing in the big bucks, as it has been since its release last weekend, then this could open the door for Disney in a brand-new way. There was quite a bit riding on this on "Big Hero 6," as Disney made something from Marvel that was not connected to its deep cinematic universe. Now, it seems the possibilities are endless for Disney. A new avenue of storytelling is emerging and that can only lead to good things for the studio, if they can keep making it work.

There is a lot to like about "Big Hero 6." The movie is colorful, its charming, its heartwarming and its hilarious. Marvel nerds, don't get too possessive though, because there are really are not too many "Easter Eggs" in the movie. This is a straight-up original story being told here, so don't spend your time looking for in-jokes or cute little winks. Disney is focused on getting this story right, and honestly they needed to make that the focus. While they focused on telling a good story, everything fell into place. I like the engrossing animation of the film, just going to show that Disney doesn't need Pixar in order to create something beautiful. I like that there are two main female characters that never become damsels in distress. These female characters are just part of the group and part of the story. That is a big step into a cool direction and I didn't think I'd see that from Disney. Plus, as this is a superhero movie, there are some cool action beats that work each time.

Hiro Hamada (voiced by Ryan Potter) is a 14-year-old genius. Living in the futuristic world of San Fransokyo, Hiro spends most of his time building robots and having them perform in illegal robot fights. Its his brother who pushes Hiro to unleash his inner genius, and force him to do something that will matter. Hiro discovers through his brother that he wants to attend the same technological institute his brother does, so he invents something unlike anything in the world of technology and demonstrates it at a science fair. The demonstration is a huge success and Hiro finds himself on the fast-track to the technological institute.

Then his brother unexpectedly dies...as these Disney movies always go.

Hiro grows close with Baymax (voiced by Scott Adsit) a medical companion robot that Hiro's brother invented for him. Hiro also grows close with his brother's friends from the institute; Fred (T.J. Miller), GoGo Tomago (Jamie Chung), Wasabi (Damon Wayans Jr.) and Honey Lemon (Genesis Rodriguez). Hiro also soon discovers that his brother's death was no accident and Hiro turns Baymax into a super-robot and his newfound friends into superheroes in order to solve the mystery behind his brother's death and his stolen science experiment.

The voice talent is all very good. I think Ryan Potter hits all of the right notes and is able to create a great character from his voice. As does Adsit with Baymax. Both Hiro and Baymax anchor the entire story, and if they don't work visually and artistically, the movie would not have worked. Baymax is easily the most fun and most creatively appealing of the characters, but that would not have meant anything without the incredible work Adsit does. Miller is always funny and his goofball voice lends a new kind of awesome for Fred. Wayans Jr, Chung and Rodriguez also do good work. I would also ask to listen for the work by James Cromwell and Alan Tudyk, both of whom made me smile once I realized theirs were the voices I was hearing.

The only thing that keeps this movie from being a great Disney movie is the same problem that still nags at me every time I watch "Wreck-It Ralph." It is pretty clear that Disney even tries to be competitive when it comes to Pixar. But the problem with Disney is that it can't break its formulaic shell. Every Disney film works from a very particular template, and "Big Hero 6" is no different. This is exactly what I feared watching the final trailers, and while it doesn't derail the film, it is bluntly obvious. There is a sad beginning, a spark of genius that wakes up the main character, the formation of the team, something that breaks the team apart, a particular emotional beat that brings the team back together again, and then the big finish. Each Disney film works like this to a degree, and it seems that Disney only wants to make one kind of film. The Pixar films are appealing because they didn't spring themselves from a template, Pixar aimed high and aimed original with each new film and that is why people love them. Disney just wants to be old fashioned, and keep telling stories like they always do. That may sell but it is no doubt getting boring.

But hey, none of that will stop kids from laughing at Baymax and yelling cool when he shoots his fists at a bad guy. Nor it will stop kids by being thrilled by the rest of the spectacle "Big Hero 6" offers. There is a lot of fun to be had here, and Disney seems destined for another hit. If they choose to make more Marvel movies, then I caution that they find a new way to tell stories, because these old-time, life lesson stories are growing old. Not every children's movie needs to be a fairy tale.