A look at the "Fast and Furious 7" trailer 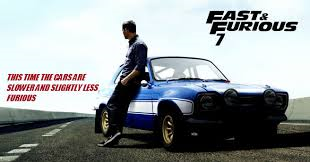 The "Fast and Furious" franchise maybe on the upstart right now, but it was a long journey to get there. There are parts of this franchise that may feel disjointed, and it is almost how much the franchise has changed over the years. I would have never guessed that "The Fast and the Furious" would spawn off into one of the most profitable franchises for Universal, but that is the glory of movies. Sometimes, I just like to be shocked, sometimes I like to be amazed.

Its interesting that "Fast Five," "Fast and Furious 6" and what from what it looks, "Furious 7" absolutely look nothing like films one through four. The series took a serious left turn (no pun intended) and I think the franchise may have benefited from that. Telling from the new trailer, the movie is going the seventh film will be a wild ride. I like that the new era of this franchise has become an "Avengers" esque ordeal featuring several stars from the franchise. By adding Kurt Russell and Jason Statham to the mix, I think this seventh rendition will have real depth.

Take a look at the new trailer here:


Posted by Shawn Hoelscher at 8:45 PM