The Essentials- #77
Night of the Living Dead 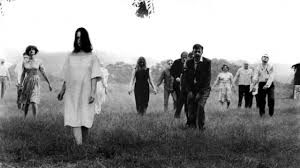 Zombies have become commonplace in the pantheon of our popular culture. For me personally, I think we owe a great deal of gratitude for this for George A. Romero. His zombie movies never felt like horror movies, or action movies. No, a George A. Romero zombie movie felt like a revolutionizing experience. George A. Romero's films were not just a few hours of mindless horror, they were not just undead monsters eating limbs off of bodies. Sure, lots of that happened in his films, but much more happened too. They were about life and our American culture, and Romero was making massive claims about the way we lived.

The movie that put George A. Romero on the map was "Night of the Living Dead" and I think its the most horrifying zombie film ever. Ever since zombies got placed in the corridors of our culture, they have been stylized past the point of no return. There seems to be one template for how zombies in popular culture should be and how they should work. That template has been tossed out and re-done over the years. But there is no question that there seems to be one way to make them on-screen these days. Before all the stylization, there was the slow-moving, nit-witted zombie. These zombies may not be very smart and they may not be very fast, but there are so many of them. The zombies in "Night of the Living Dead" move slow and they are not very smart, but the make-up design is completely freaky and the way they move and their creepy mannerisms elevate the movie. Put freaky-looking, slow-moving zombies in a black-and-white backdrop and you have one hell of an experience waiting for you.

Not only are the zombies creepy to look at, but the film has a melancholy sadness to it. Consider a scene where a mother comes down to a basement to check on her daughter, and learns that her daughter has turned into a zombie. The undead daughter proceeds to take a garden tool and stabs her mother to death with it. While the camera angles and acting create a viciously scary scene, it is just plain sad to watch a daughter kill her mother. Scenes in movies where not this savage in the 1960's and I give myself a headache wondering how Romero was able to pull that off in his script.

Remember when I say Romero's films were revolutionizing? Well, that showed as early as his first zombie movie. The lead character is a man named Ben, played by Duane Jones. Duane Jones is an African American, and while that doesn't seem odd by today's standards, remember this was made in the 1960's. It was very unusual to see African American actors in lead roles in Hollywood movies. It was especially unusual to see unknown African American actors in lead roles in Hollywood movies. No matter, that is exactly what Romero did. Romero wanted to make these zombie movies last, and while he claims that Jones made the best audition, I think there was a metaphor he didn't realize he made.

"Night of the Living Dead" is a movie about survival, and it tells a story about us. This kind of mentality gave birth to a popular subgenre in horror and this was just the start.