The Essentials-#80
The Invisible Man 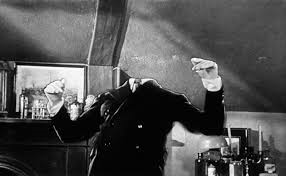 "The Invisible Man" was one of the earliest Universal Monsters the famous studio created. It was based upon a novel by H.G. Wells, who also wrote The Time Machine, The Island of Dr. Moreau, and War of the Worlds. While the last three films are sunk deep in the realm of science fiction, "The Invisible Man" works best as a horror film. A dark reminder of what science experimentation can do to a person and how they can be corrupted. The film was made in the early 1930's, which means it may not be as haunting to the casual horror fan. Still, there is some material that I find majestically creepy.

Take a look at the picture above, that is actually a pretty realistic looking invisible man. With today's technology, we can make an effective invisible person in a snap. But this was 1933, they didn't have the Skywalker ranch, they didn't have WETA. How Universal studios were able to make such an effective looking invisible person is beyond my rational thought. This great look is persistent the entire movie long. I am in deep awe of how well it looked. "The Invisible Man" was not the only Unviersal movie to feature true movie magic, there are several films from that era that played with our senses in way that was fun and thrilling.

I was also taken aback by how the film makes winter weather scary. Usually when we think of winter weather, we think Christmas. When we think of Christmas we think of family, friends, loved ones, snowmen, hot chocolate, presents, and giving. These are all widely positive concepts. Yes, winter weather is a bitch, but it also fills me up with happy thoughts. When I am watching a horror movie, happy thoughts are the last thing I feel I am going to think of. But "The Invisible Man" nearly tarnishes that psychic norm I had in my head for a very long time. How the film uses weather in the film is both astonishing and terrifying in equal measure.

I can't get too much further into this review without pointing out the extraordinary performance by Claude Rains. Claude Rains was like a Tom Hanks or a Tom Cruise of his time, putting his unique signature on an entire host of big, memorable roles. Claude Rains is absolutely fascinating in this role. He is gripping, funny and horrifying all at the same time. He has a maniacal laugh that will get under your skin and have you cheering at the same time. For this film to work, there needed to be an actor who could make this role his own and make something special out of it. I think Claude Rains did that and more with the role.

In the mood for some old school? Look no further than "The Invisible Man"