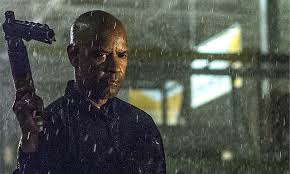 Originally, I did not know that "The Equalizer" was based upon an 1980's television show. I never once saw the show nor do I know anything about it. If you are reading this review from a comparison stand-point, then I regret to inform you that I don't have one. While I enjoy vintage television, I don't watch everything and sometimes stuff goes over my head. However, from what I have read from sources I trust, the television show was bland and forgettable.
Seems fitting since the movie "The Equalizer" is bland and forgettable.
The first half of the movie focuses on Robert McCall (Denzel Washington) who has a seemingly normal life. He spends his days working at an Home Depot-like store and taking great pride in what he does. By night, he sits at a local diner, reading books and also creepily talking to a local girl Terri (Chloe Grace Moretz) who is weirdly young for a man of McCall's age to be talking too. He also takes notice she gets into a mysterious car at late hours of the night. We jump between McCall's day life and night life to the point of agony when Terri gets ruthlessly beat-up by her employers. Turns out Terri is a prostitute for the Russian Mob.
Robert McCall decides to bid for Terri's freedom in "Taxi Driver" like manner. When he pays the Russians a visit, things go south pretty quickly. Soon enough, McCall is in a one-man war against the Russian Mob. This war gets so serious that a high-ranking operative of the mob named Teddy (yes, that is the characters real name, played by Marton Csokas) is flown from Moscow to Boston in order to deal with the problem. But McCall is a retired black ops government operative before working as a lumber salesman, which basically gives McCall the chance to defeat bad guys with unrealistic ease.
Sound familiar yet? It should. Although the set-up is slightly different, "The Equalizer" plays out like "Man on Fire," a similar but superior motion picture also starring Denzel Washington. I could tell you that McCall is almost a copy of Creasy, the character Washington played in "Man on Fire." But honestly, what would be the point. Washington basically spends each new film playing a version of himself. He has a specific attitude and specific style when approaching a character, and that motif is beginning to become dry. The similarities don't stop there though. McCall is haunted by his past, much like Creasy. McCall sees protecting Terri has a second chance in life, much like Creasy. McCall even recounts old times with an old buddy (Bill Pullman), much like Creasy. The difference is that Creasy was a much more compelling character, McCall is invulnerable nearly the whole movie and he never breaks a sweat when killing the bad guys. Which means he comes off less like a hero and more a like bully.
While Csokas tries to play Teddy well, he should have grown a mustache for the role so he could twirl it. Teddy is such a cartoonish villain that he never feels like an actual threat. Come to think of it, he's not. The film's ending is another anti-climatic duds that you wish you didn't see and the character of Teddy seems wasted after the whole movie builds up to the Teddy versus McCall showdown. This is yet another reason why McCall should have been built like Superman, it just doesn't work in the movie. Oh, and about that ending, another reviewer described it as "Home Alone' in Home Depot" and explanation is so perfect that I had to quote it. And yes, it is as silly as it sounds.
﻿
Moretz is fine as Terri, she's just not given much to do. She is nothing but a device to get McCall fighting the Russians. The easiest thing to do with her character is have something terrible happen to her then throw some clichéd character personality traits at the end to put a nice, happy bow on the story. Which, of course, happens point by point. It is hard to feel bad for a character when they are so stricken by routine.

I wish I could have liked "The Equalizer." I wish I could have deemed it recommendable at the least. Denzel Washington is one of my all-time favorite actors, but his mute, one-trick pony of a style is getting old and he needs some new tricks. "The Equalizer" is a big waste of time, not even good enough on a mindless sort of way and that is just sad all around.