The ABC's of Death 2 Review

The ABC's of Death 2 Review 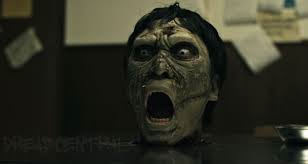 Last year, I reviewed a film called "The ABC's of Death" and it was a ton of fun if you re-read my review. It is a collection of 26 segments made by 26 different directors. The audience is told at the beginning of the film by title-card that each director was given a letter, then those directors chose a word and were given 100% creative freedom with their segment, the segments just had to be about death. What ensued was one of the strangest, delirious, craziest, mini-film festivals one could ever see.

"The ABC's of Death 2" features 26 different directors and 26 different words. Once again, the resulting film is big, crazy, creepy fun. Once again, we are delighted by a richly imagined and richly diverse set of mini-horror segments. Each segment takes up its own style, each segment allows to thrive on its own ambitions. I think thing that these films definitely benefit from is not being connected to each other, at all. Each segment is a complete original and nothing that occurs in one segment is connected to the other. What "The ABC's of Death 2" feels like is a series of smaller "Twilight Zone" episodes, if that show cranked up on steroids.

Some of my favorite segments included "V for Vacation," which is a nice comment on the found footage genre. I don't know why I find bloody, naked, Asian people so horrifying, but I found that segment instantly effective. I also liked the futuristic creepiness of "U for Utopia" and I like how this series has uses science fiction in incredibly eerie terms. I loved "B for Badger" because its exactly what the title claims it is, and not at all at the same time. "Q for Questionnaire" is neat in the way that begins one way, and completely surprises its audience at the end of the segment. "X for Xylophone" will probably inspire all of you to never hire a babysitter ever again. I also liked the richly animated "H for Head Games" as much as I liked the strange Claymation of "D for Deloused" very cool segments.

Once again, there are some drawbacks. The segment for "P" begins as a cool throwback to the styles of the 1920's and 1930's. I absolutely loved how it revolved around three individuals over-acting behind a black-and-white backdrop, if you can imagine the Three Stooges or the Fly Deuces in this segment, that was the aim they had. The title is called "P for P-P-P-Scary" and while I enjoyed the segment, I didn't like that the title cheated. It would have been cool if each segment represented a certain letter and I would have loved to see how each segment experimented with the style it created.

This series is all about having fun, and that is what you will get with "The ABC's of Death 2" a ton of fun. There are funny segments and there are creepy segments. Once again, I felt like I just experienced a horror film festival in a tiny two-hour landscape. I had a great time with it, and you will too.