My reaction to the Avengers: Age of Ultron trailer 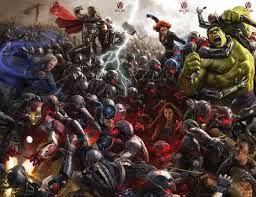 Well this is just a tad amazing that I am talking about this now instead of next week.

The first trailer for "Avengers: Age of Ultron," which was supposed to air next week during "Agents of S.H.I.E.L.D." was leaked online last night. If you try to find now, there is a pretty good shot you won't find it anywhere at all. It is interesting living in a time where so much can be readily available for us, and how that can be a good or bad thing.

I have watched the trailer for "Avengers: Age of Ultron" quite a few times already. I brought my IPad into work today, just so I could show my Kindergarteners the trailer before it got taken down for good. We ended up watching it several times just within the first hours of day. Not a bad way to begin a Thursday geeking out with a bunch of four and five-year-olds. So I have watched the trailer a lot, and I feel I have soaked up quite a few details.

I absolutely love the "No Strings On Me" rendition in the trailer. If you know your Disney movies, you will know that song is from "Pinocchio." In that movie and fairy tale, Pinocchio is created by Geppetto and Pinocchio wants to be a real boy. In "Age of Ultron," Tony Stark will invent the Ultron robot. I wonder if the movie will play like a warped, perverted version of "Pinocchio." It would be an interesting way to parallel advertising with the film itself.

There is a scene in the trailer where one of the first versions of Ultron is stumbling out of a dark room and confronting the Avengers. We clearly see Iron Man, Captain American, Rhodey, Thor, Hulk and Hawkeye in the shot. There are also three women in the shot, one is clearly Black Widow and I have a safe bet that another is Maria Hill. Who is the mysterious woman standing next to Thor? Could it be Jane Foster? Maybe, but there is no evidence anywhere that Natalie Portman will be in this movie. Could it be Evangeline Lily's character from Ant-Man? Maybe, but I don't see any evidence on her either. Could Jane Foster be recast? Maybe, Portman was never big on starring in these movies in the first place, and perhaps her contract with Marvel has expired. This mysterious third woman is intriguing, and perhaps we could be getting a surprise guest from the comics that will wow us in the movie.

We get a quick glimpse of Andy Serkis's character. If you know what Serkis looks like, you know its him. Serkis doesn't seem to be playing any sort of motion-captured character, so the big question is, who is he playing? They wouldn't sign somebody like Serkis to be a throwaway character no Marvel geek has heard of. Telling by his hairstyle and goatee in the trailer, my guess is he is playing Ulyesses Klaw, a villain in the Marvel universe. I wonder if we will be getting an extra villain in this movie, or if they are preparing the character for the future, or if I am way off.

The shots of Iron Man in his Hulkbuster armor were OUTSTANDING, as were the glimpses of Hulk fighting Iron Man in his Hulkbuster armor. I have to admit that I am not crazy about Quicksilver's movements in the trailer, and I have to say that I prefer the movements of Evan Peter's version of the character from "X-Men: Days of Future Past." Maybe they will look different in the next seven months, and I kind of hope they do. What sealed the deal for the trailer though, was the voice of James Spader. He is going to absolutely rock as Ultron.

What were your thoughts on the trailer? I'd love to hear what everybody else thought.
Posted by Shawn Hoelscher at 7:38 PM