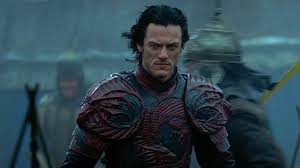 This week, when I wrote about the superhero movie bubble possibly bursting soon, I had no idea just how much of an impact the subgenre has had on the cinematic market.

"Dracula Untold" blends history, gothic horror and superhero genres into one bombastic movie. It has also been no secret for past few months that Universal is planning to create a Universal Monsters franchise, in the same vein of what Marvel is doing and what DC is going to do with their respected superheroes. If "Dracula Untold" is any indicator, this Universal Monsters shared universe is a horrid miscalculation and should be corrected immediately. Sometimes, what works for one or two companies doesn't really work for every company. It seems that Universal may learn that the hard way.

Let's back up a little bit though. As I watched this film unfold, I was kind of taken aback. I was actually shocked how much I was intrigued by the start of it. I liked that Luke Evans was playing a fictional version of Vlad III Dracula, also known as Vlad the Impaler. This is the man who Bram Stoker based his famous vampire on. Vlad III was charged with keeping Christianity a free-willing and faithful practice in Eastern Europe and that meant doing battle against the Ottoman Empire. Yes, Vlad had a knack for impaling his enemies as well, which how he became the famous candidate for our famous vampire friend. History has been put parallel with fictional stories before, I have seen great examples (X-Men: First Class), I have seen crazy examples (Abraham Lincoln: Vampire Hunter) and I have seen horrible examples (Robin Hood, 2010).

I was amazed in the first half of "Dracula: Untold." I was amazed just by how charming Luke Evans is becoming as an actor. I was amazed by how I was drawn into the story of a man protecting his kingdom from the rising Sultan of Turkey. I was amazed by the grotesque weirdness of the beings (the leader is played by Charles Dance from "Game of Thrones!") Luke Evan's Vlad finds in a cave, the very beings who transform him into a vampire. I loved Dominic Cooper's portrayal of Mehmed II, who challenges Vlad for his kingdom. Cooper seems to really relish the times when he plays a villain, just check out "The Devil's Double" if you disbelieve. There is some cool atmosphere and cool costumes in the first half. I sat there waiting for a reason to hate this movie on the level that so many other critics have.

Then it hit me, around the time Vlad leaves the cave. Dracula's apparent unknown origin is that he became a superhero in the vein of "Underworld" in order to protect his kingdom from an invading force. The entire movie plays like a big superhero movie. It features a shameless rip-off of showing us a struggle, showing us how an ordinary man obtains extraordinary powers, and then the big, epic finish. The film follows every superhero cliché in the book, and it uses just about every visual cliché in the book (the film begins with a nice battle in slow motion.) Despite the good start, good performances and great energy, my appetite for this entry quickly waned as I realized the inevitable.

I was also quite shocked by just how xenophobic the film really was. I understand that Vlad the Impaler fought off the Ottoman Empire, which mainly consisted of Turks. I understand that the Turks are the villains in this film simply based on history. I get all of that. I just don't understand the need create such overdone features on the bad guys, it felt like I was watching a new-age minstrel show during some parts. Add in some over-stylized battle scenes, and it feels like Universal really overstepped some boundaries here.

It is hard when you feel like a movie will fail, then it shows you a glimmer of hope, only to let you down again. This is exactly what I got with "Dracula: Untold." While Universal brings back some of the great mood and gothic atmosphere that made Dracula great, it also shoehorns in an unwanted history lesson while also creating a bigoted "Underworld meets Van Helsing" movie. It was something I felt very sad about.