Who Played It Best? Jean Valjean

Who Played It Best? Jean Valjean

Taking French class since 5th grade as well as singing in the choir all four years of high school gives you lots of knowledge. Putting those two experiences together led me to "Les Miserables" frequently. Yes, even I love a good musical every once in awhile, and I find "Les Miserables" to be quite the overwhelming experience. It is a powerfully realized tale and when done right, it can be quite emotionally demanding. I know there have been several adaptations of the classic story, but I can say with honesty that the Jackman and Neeson versions of the story have flattened me every time I watch them. I actually want to grab the Blu-ray for Jackman's version of the story, simply because I feel I may just upgrade my Top 10 of 2012 list. Jean Valjean is an absorbing character, he's lead to a life of crime simply for wanting to feed his family, he gets an unsuspecting second chance from a priest, and the rest of his life he is on the run, even though he doing good in the world. Nobody could bring this character to more potent life that both Jackman and Neeson. So who did it better?

My Two Cents:
Its difficult for many to imagine a time before Liam Neeson became an action hero icon, but there was indeed a time. Neeson really got his start playing good-natured, mentor type roles. Look back at "Schindler's List" or "Rob Roy" or "Chronicles of Narnia," or "Kinsey," or "Star Wars: Episode One, The Phantom Menace" or "Love Actually." Those movies are nowhere near the same pool as say..."Taken," "Batman Begins," "Kingdom of Heaven," "The Next Three Days," "Unknown," "Battleship," "The A-Team" or "Non-Stop." There has always been a double-edge to a lot of Neeson's work, which is why he's an actor I admire quite a bit. With that said, "Les Miserables" is a musical and the version Neeson starred in was a regular movie. In the version Hugh Jackman made, Jackman sung. Jackman has theater experience, so when he sings, he really does sound quite good. This is part of the reason why Hugh Jackman gets the edge this week from me personally. "Les Miserables" works as a musical because the lyrics of the songs elevate the story being told, it is just not the same without the songs. As good as Neeson was, I feel Jackman's version was better-written, felt more authentic and Jackman just completely nailed it.

Disagree? Email me (bloggershawn@gmail.com) or simply sound off in the comment section below. You have until next Wednesday to get your votes in.

LAST WEEK: WHO PLAYED IT BEST- THE PUNISHER
Last week, I took a look at everyone's favorite comic book vigilante. Here is how the vote shook out for the best Punisher. 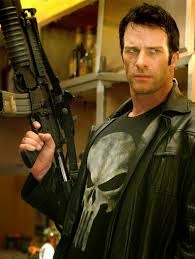