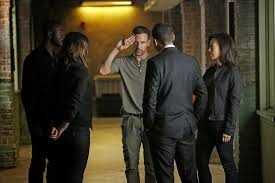 I have noticed that with most television shows, each season runs on a similar template. We get to know a core group of characters, there is a specific dilemma troubling them, they research that dilemma and by season's end, the dilemma is resolved. I think what made the first season of "Agents of S.H.I.E.L.D. a bit tough as a sit-through was that the set-up of the show was very generic. There can only be so many episodes of the team going after a big bad or searching for a McGuffin before it gets stale. Especially since there are already several shows on TV that do that exact thing. While season two has completely changed the direction of the show, it is at least trying new things, seeing what works and what doesn't. You can't argue over a show that is willing to experiment.

This week's episode of "Agents of S.H.I.E.L.D." picks up exactly where the other episode left off. We have Agent May (Ming Na-Wen) in pursuit of Carl Creel (Brian Patrick Wade) after he took the first 084 from Lance Hunter (Nick Blood). While Agent May wants to help Hunter, he thinks following Creel is more important, which leaves Hunter in the hands of the United States military. Meanwhile, whatever this 084 is, it can't even protect the Absorbing Man, and Creel realizes that it is slowly killing him. Not only that, but Creel and his stolen 084 has captured the attention of Raina (Ruth Negga), yep Raina who worked for John Garrett (Bill Paxton) in season one, the infamous woman in the flowered dress. She seems disinterested in HYDRA now, and is once again working for a shadowy figure and even assists Director Coulson (Clark Gregg) in finding Creel.

What makes this episode of "Agents of S.H.I.E.L.D." instantly lovable is that there seems to be a lot going on. Sometimes, too much story can kill a show or a movie in some cases. Other times, especially for TV, it is needed for the show to thrive. An "undead" S.H.I.E.L.D. agent being told to rebuild a debunked, corrupted organization would be enough for a satisfying story. But we are also getting the toll being director has on Coulson and Skye (Chole Bennett), we see Lance Hunter contemplating giving up S.H.I.E.L.D. to the military, especially after his friend Hartley (Lucy Lawless) died last week. We see that not only HYDRA has eyes for this mysterious 084, but so does Raina and her new employer. I also love that with this season, nobody is quite who they seem and that adds more to the drama. It seems ABC is willing to juggle several interesting and interweaving storylines. It seems ABC is a good plan on how to play out these storylines and if they hit every note, boy, this is going to be a great season.

Oh, and we also got a glimpse of the shadowy figure Raina is working for, it is the one and only Kyle MacLachlan. I have known for a couple weeks now that MacLachlan is playing the mysterious "doctor" who happens to be Skye's father. MacLachlan is not in much of the episode, but what we do see of him is intriguing. One thing is for sure, this is not the nice guy MacLachlan played in David Lynch's "Blue Velvet." There is a stern coldness to his portrayal tonight, and I am already maddeningly excited to see more of him, and I am already rabid to discover he is playing somebody well-known to the Marvel canon.

One thing I can also say I liked was that we don't know if Carl Creel is dead or not by the end of the episode. One thing I didn't mention last week that I flat out could not stand was the death of Isabele Hartley. Marvel is rich with characters, and it seems this show has barely taken advantage of it. I couldn't stand that they killed off Victoria Hand last season, a potentially interesting character, or Blackout or any other Easter Egg-type characters they killed off. I hope this season continues to dabble and play with the characters of Marvel and I hope they are willing to create significant storylines with them. I don't want them to spout out a couple lines and then die. These are cool characters and they should be used.

Still, so far, this season is off and running. It seems that we are in for a very different type of season compared to season one. Honestly, that is not a bad thing, not by a mile. I will see you back here next week for more. After that look at next week's episode, I can already feel my brain neurons firing over what will happen.