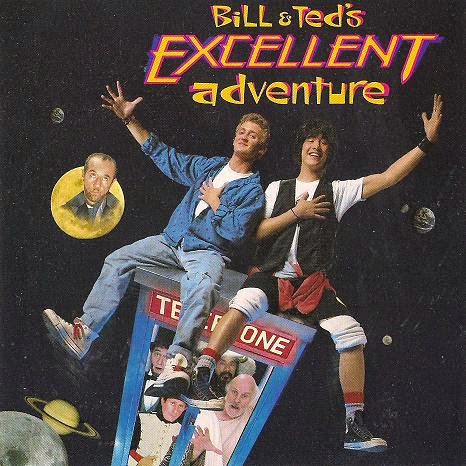 It has been a great while since I saw both "Bill and Ted's Excellent Adventure" or "Bill and Ted's Bogus Adventure." But I do remember enjoying what I saw. Sure, they are both very strange and very silly movies, but I always found some sincerity in that. Plus, it has always been the best performance by Keanu Reeves to date. It was this series where Reeves was not a blank slate, a face full of boredom. I don't know what he saw in that script to act so unlike himself, but I dug it. It seems that perhaps I will be able to pick those movies up on Blu-ray soon, as it seems another Bill and Ted movie is in the works.

Alex Winter, co-star of the franchise, had something to say about it yesterday.

“[Bill & Ted] will be 40-something and it’s all about Bill and Ted grown up, or not grown up,” Winter tells us. “It’s really sweet and really f—-ing funny.
“But it’s a Bill & Ted movie, that’s what it is. It’s for the fans of Bill & Ted. It fits very neatly in the [series]. It’s not going to feel like a reboot. The conceit is really funny: What if you’re middle-aged, haven’t really grown up and you’re supposed to have saved the world and maybe, just maybe, you kinda haven’t?”
“There’s many versions of ourselves in this movie,” he continues. “[It’s] answering the question: ‘What happened to these guys?’ They’re supposed to have done all this stuff, they weren’t the brightest bulbs on the tree, what happened 20 years later? To answer that question in a comedic way felt rich with possibility.”

That sounds great, it sounds like progress and evolution, not a treading of water.

It will be great to see Winter and especially Reeves back in these roles, I wonder if Reeves still has the power to be off-the-wall silly still. Definitely more on this story as it progresses.