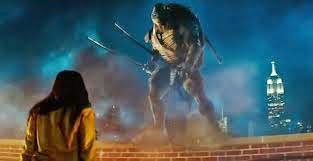 Welcome to "Two-Part Capers" a new column where I and my friend Hunter Kelly will review a film, giving the readers two different perspectives on a film. We did this a few weeks ago with "Guardians of the Galaxy" and now we have both decided on a title for this special column and we plan to keep this up on an irregular basis. Today, we will both weigh in on "Teenage Mutant Ninja Turtles" a movie that has been met with a lot of scrutiny over the last few days.

WARNING: THESE REVIEWS MAY CONTAIN SPOILERS, YOU HAVE BEEN WARNED NOW! IF YOU DO NOT WANT TO READ SPOILERS, PLEASE COME BACK WHEN YOU HAVE SEEN THE MOVIE!

Surpringly, our reactions may not be what you think:

Here is Hunter Kelly's review
If there has been one movie this summer that the fanboys have doomed it's existence it's definitely been director Jonathan Liebsman and producer Michael Bay's semi reimagining of the classic 1980's comic book/cartoon/movie franchise Teenage Mutant Ninja Turtles. Have no fear readers, the Heroes in a Half Shell are back! Now maybe this reboot isn't for the better, but after watching it's definitely NOT as bad as many have said it was going (or hoping) it would be. For better or worse Michael Bay has brought us 4 Transformer movies that have made billions at the box office. While that doesn't necessarily make for a good film, it proves he's doing SOMETHING right. There is no question, Bay's handprints are all over the turtles shells in this movie. But I don't think it's necessarily a bad thing. If there is one thing Michael Bay is good at it's directing some really intense, awesome action scenes, and it's delivered in TMNT. Instead of practical makeup and effects for the turtles this time around, advancements in CGI have led to the turtles being played by actors in motion capture suits. To be honest I had no idea who any of the actors who played the turtles, and Master Splinter were beforehand besides Noel Fischer from Shameless who plays Michelangelo. Johnny Knoxville for whatever reason was cast to play Leonardo's voice which to be honest was the most awkward voice casting choice I could think of. I kept expecting to hear "Hi I'm Johnny Knoxville, welcome to Jackass!" Nit picks aside the turtles were fine, Splinter was cool, and Megan Fox's April O'neil was serviceable. The biggest blunder in this movie was the villain, Shredder, who was more similar to the mech-suited samurai from The Wolverine than the original Shredder. The Shredder armor was bizarre, clunky and didn't really work for me. In the end I think the highlight of the film was the almost found film footage scene in the Turtles base camp in the sewers. SPOILER ALERT the turtles and splinter are ambushed and must fight their way to safety. It was all pretty cool. The escape scene on the mountain was bizarre but I enjoyed it and the ending looked like the best cut scene from a PS4 game I've seen yet! I know I know it sounds like I'm picking on turtles but seriously the movie is called TEENAGE MUTANT NINJA TURTLES! If you can't get on board with a premise that bizarre, don't go see the movie. Bottom line Liebsman and Bay didn't ruin your childhood. And if you have such fond memories of the turtles, do yourself a favor and rewatch some of the original cartoons or revisit Turtles in Time and tell me the mountain chase scene from this current Turtles movie doesn't blow ANYTHING from those movies out of the water. Teenage Mutant Ninja Turtles is a silly, dumb, ENTERTAINING time at the movies. Can't wait for the sequel!

Here is My Review
When so many negative reviews from film critics come from one movie or when word-of-mouth is so terrible that it can be hard to muster up enough courage to see the movie. When everybody you talk to makes so many convincing and proper arguments against a movie, it can be easy to give into those arguments and dismiss a movie altogether. For me, I have to see everything myself. No matter how silly the idea of the movie, no matter how much I hate the cast and crew involved, I give everything a serious, open-minded shot. There has been a boatload of controversy circling around the new “Teenage Mutant Ninja Turtles” movie and I have written about it already before. I had to see the film for myself and I have some thoughts on the movie. I will say right now though, that I am not in league with everybody else and I will not be jumping on the no turtles bandwagon.

I can happily say that all the nightmare rumors that were circling around this movie were not true. The turtles do not come from another dimension, William Fichtner is not playing Shredder and there is no female turtle and no turtle love story. This is the turtles story that we know and love. These are the characters we have loved over the years, well for the most part that is. All I want to say is that if you have been avoiding this film because of those rumors, I can say that you can go ahead and check out the movie because they were indeed rumors.

I was hesitant walking into this new installment of “Teenage Mutant Ninja Turtles” simply because of Michael Bay. Yes I know, he’s producing and he is not in the director’s chair. Somehow, it always seems that when Bay is playing along, some of his rhetoric works itself into the final product and that scared me. He has completely tarnished one family-friendly, old-school icon (Transformers) and I did not want him to ruin another one. So I am happy to report that no whiff of Bay made into this final product. Director Jonathon Liebesman uses his own style and his own tone when he sat down to make this reboot. Does it reflect what most action cinema is doing these days? To a degree, I would say yes. But unlike the “Transformers” movies, “Teenage Mutant Ninja Turtles” is a movie that I can recommend families to go to. There is no unrelated sexual humor, no ingesting of pot brownies, there are no sexist or racist jokes. The movie also does not drag itself out and overstuff itself with unwanted subplots. With Michael Bay producing, it is a miracle that nothing disgusting or unneeded made it through this movie.

Yesterday, I posted a review of “Planes: Fire and Rescue” and I discussed how I thought the film would not appeal to the whole audience and how it aimed so low. “Teenage Mutant Ninja Turtles” is packed with fun, and it’s a movie that can be liked and appreciated by both children and adults alike. If you are worried about the PG-13 rating, I kind of thought that the MPAA may have been a little harsh, I guess the action scenes are a little rougher around the edges, but I think the film could have received a PG rating.

So is this new “Teenage Mutant Ninja Turtles” movie the best thing since the 1990’s movies? Nope, I still think the 1990 Turtles movie is still my all-time favorite. Is this new Turtles movie perfect? Not by a long-shot. While I think Megan Fox does what she can as April O’Neil, I just never buy her as an ambitious news reporter. In 1990, I thought Judith Hoag was very good as April O’Neill; she was cute, charming and confident, much in the vein of Amy Adams’ Lois Lane from last year’s “Man of Steel.” Here, Megan Fox just seems to be playing just another variation of the role she always plays, never fully giving herself to the material. I also think that the way to story connects the Turtles to April is slightly weird and I think that part of the story could have and should have been edited out of the script. And as good as Tohoru Masamune is as Shredder, the design of the character is so over-the-top that it comes off kind of cheesy.

But hey, the action scenes were surprisingly exciting, and I think you will be quite surprised by how well they pay-off. The design of the Turtles might be slightly different than what we are used to see, but it never derails the movie, and the work done by Pete Ploszek, Jeremy Howard, Noel Fisher and Alan Ritchson is awesome. I also got a kick out of both Will Arnett and Whoopi Goldberg (an actress I usually don’t care for) and thought they had surprising chemistry with Fox. William Fichtner is also a bad guy in this movie and he once again proves why he is such a particular talent that I wish we got more of.

Bottom Line: I was indeed surprised, and even though this is not the across-the-board winner like I wished it could be, I feel critics and the world at large has been a little too harsh on this movie. It is fun and it is a big action movie the whole family can watch together. That seems very hard to come by these days. Also, for most of the running time, these feel like the characters I grew up with as well.

I hope you have enjoyed these so far, there is plenty more on the way.
Posted by Shawn Hoelscher at 9:00 PM