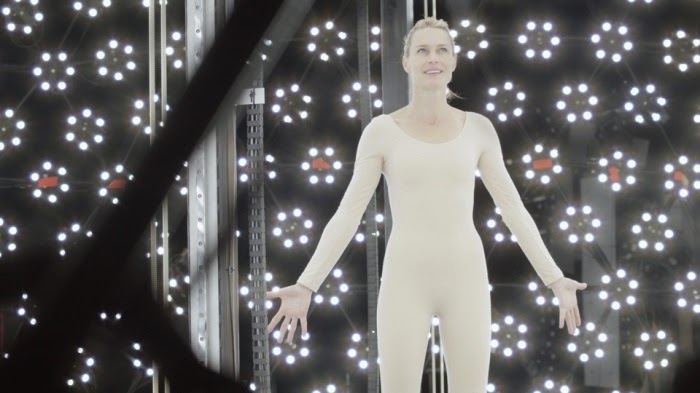 Imagine a world where Hollywood began making huge cinematic breakthroughs. Imagine the studios of Hollywood began to do more than just make movies and became gigantic science conglomerates. What if the age of the movie ended and a new age of art took shape? A world where you could become any actor, any historical figure, any fictional figure just by imagining it. It would be like taking LCD, but the hallucinations would be easy to control and run entirely by you, there would be no bad trips. Have you ever thought about imagining giant flowers popping out of the Earth? Have you ever thought about kissing your favorite celebrity? This is the world that would be possible, and those possibilities would be seemingly endless.

This is the future presented in “The Congress,” the incredible journey lead by Robin Wright. Robin Wright plays a fictional version of herself. A version that has disappeared from the world of film in exchange to take care of her two kids. Her loyal agent (Harvey Keitel) and a rather snobby studio executive (Danny Huston) miss her, and technology has come up with plan so that everybody can have their cake and eat it too. Wright would have to preserve her likeness for digital Hollywood. Hollywood would then be able to use Wright in any movie without any restrictions and Wright would receive quite the payday for her involvement. She agrees, ready to have a life committed to her children. Twenty years after her preservation, Wright is invited by Miramount (the fictional studio behind her preservation, a fun take on the real Miramax and Paramount studios) to join their Futurist Congress. The congress will be a special convention which Wright will spearhead, as Miramount unleashes their new digital possibilities to the world.

The last half of the film is nearly impossible to describe or discuss. Once Wright sniffs a mysterious purple fluid and begins to enter a completely animated world, the movie seems like it will suddenly turn into a bad acid trip. But the film remains thematically sound and there is an unbelievable journey at hand. Not only that, the film does touch on some relevant topics. We have lost too many artists over the last two years. Trying to wrap my head around the fact we lost both Robin Williams and Philip Seymour Hoffman in the same year is too tragic. With Hoffman in particular, I remember rumored discussion about digitally adding the actor to all of the scenes he had left in “The Hunger Games” finale. A friend even said something about the possibility of doing this for every actor, just in case they should die in the middle of filmmaking. I am slightly disturbed by this need to digitalized actors. The film argues that we really are seeing the actors, but we are not, these are fantasy versions of real actors. Would the digital preservation of an actor really honor the actors? Or would it become just another way for Hollywood studios to cash-in on brands? The film offers up an engaging argument on these topics.

I do agree though that Robin Wright has been greatly missed from film lately and her work as herself in “The Congress” is her very best acting since “The Princess Bride.” I have to admit that this is an actress I have love more than I don’t love. I am a huge fan of Netflix’s “House of Cards,” I love “Unbreakable.” Wright is able to display great range and raw talent, but we have never seen anything like this before. She has never been this human, she has never been this watery-eyed, she has never felt this authentic, and every moment of her acting is mesmerizing. Her animated counterpart is also really well-done and I particularly loved the old-school style animation of the film. In a world where seemingly all animation is computer-generated these days, it was nice to see something with a more classic look.

The film features a wonderful cast which includes Keitel, Huston, Kodi Smit-Mcphee, Samie Gayle, Jon Hamm, and Paul Giamatti. Each actor doing incredibly impressive work, and I was particularly impressed by Danny Huston. We have seen Huston play slimy assholes before, but never once this well. I also very much liked the work by Giamatti and Keitel, both who have one tender moment in the movie that they both really nail. I also liked Hamm’s work, whom only performs voice work and he does great.

“The Congress” may have been small in studio, but it was massive in theme, character and story. It also features an absolutely captivating performance by Robin Wright and has features an extraordinary message
under the surface. “The Congress” is absolutely worth seeing.

Posted by Shawn Hoelscher at 4:21 PM