Overlooked Film of the Week- "Escape from Tomorrow" (2013)

Overlooked Film of the Week-#72 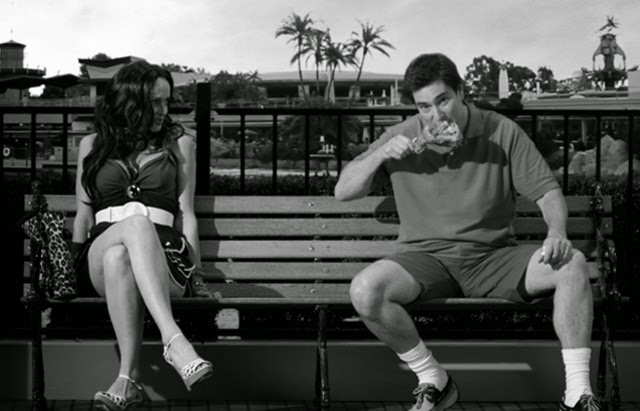 Whether you heard about it or not, “Escape from Tomorrow” was met with an overflow of controversy. Director Randy Moore shot an entire movie in Walt Disney World without any permission. Yes, you read that right, Moore had absolutely no authorization to shoot his movie at Disney World, but he did anyway. He got shots on rides, he got shots of employees, he got shots of people in costumes, inside buildings, outside buildings, the whole bit. That type of work is taboo in this country. I remember my friends and I used to make movies when we were in high school, and I remember we decided to shoot a scene in a grocery store without permission. We only wanted to get about a minute of footage tops, and that took at least an hour because we were explaining ourselves to every employee we came across. That may not have been a shining moment for me, but it was a fun experience.

“Escape from Tomorrow” is a wicked little horror movie. Something that feels in the vein of David Lynch, Roman Polanski and Stanley Kubrick. What makes this movie so interesting is the location, first and foremost. Walt Disney World is a happy place, a wonderful vacation spot for kids, every kid in the world dreams of going there at some point. It is not the first place one would think to shoot a horror film at, which is precisely why it is so horrifying. The film is shot completely in black and white, which only ramps up the horror of the film. I think Randy Moore expertly uses his location to superb effect, making this very magical place the most frightening place on earth. That coupled with the black and white scenery makes everything scarier.

The film revolves around Jim (Roy Abramsohn) a middle-aged, repressed man who spending his final day of vacation at Disney World with his family. They are trying to make the most of their day when Jim begins to suffer from terrible hallucinations. These hallucinations include his son Elliot’s (Jack Dalton) eyes turning black, or seeing monstrous faces on people or seeing that all the Disney princesses are really members of a prostitution ring. These hallucinations make trouble with his wife Emily (Elena Schuber) and he quickly finds out that something sinister is lurking within the confines of the Amusment Park.  The work by Abramsohn is the glue to the entire movie, and he really does a good job in the role. Abramsohn is very good at being fatherly and equally good at being mentally disturbed. The rest of the cast is also very good in this movie.

The film benefits from being subtle with its horror. The scares are not big and broad, they are small and scaled. If you blink, you could miss something. Sometimes these smaller scares are more effective then the big, gory scares. This movie put me on edge because I could not see anything coming and that left me uneasy. Even with the most subtle of horror films, I can at least see some scares coming, but there is no routine in this movie. There is no pattern to the scares, and it feels like anything can happen at any moment. If you like horror films where nothing can be predicted, you’ll love this movie.

Controversal, ambitious and crazy, “Escape from Tomorrow” is worth a look.

Posted by Shawn Hoelscher at 6:52 PM