Overlooked Film of the Week-#70 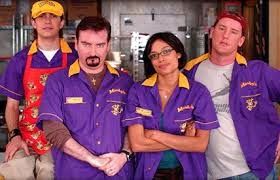 I have always liked Kevin Smith’s comedies. From “Mallrats,” to “Dogma” to “Jay and Silent Bob Strike Back,” and to “Chasing Amy,” he has created a different kind of comedy world onscreen. Much like the current Marvel universe, there is a unwritten rule that the characters who appear in his films all exist in the same universe and these idea is stringed together by Jay (Jason Mewes) and Silent Bob (Kevin Smith), who appear in most of Smith’s comedies. It seems the comedic films that Smith is most known for are his two “Clerks” movies. The first “Clerks” film was in 1994 and that film coupled with “Pulp Fiction” gave birth to the rise of independent cinema in the United States. “Clerks II” seemed more like a publicity stunt more than anything else, but I found it to be a fun movie, completely in the vein of what Smith has always done.

The first “Clerks” film featured a black-and-white landscape, and even though it was somewhat of a raunchy comedy, it was a story about life more than anything else. We follow the lives of Dante Hicks (Brian O’Halloran) and Randal Graves (Jeff Anderson), two friends who work at a Quick Stop, a small convenience store. They ever seem to have too many customers, so they spend their days talking about women, popular culture and life itself. We have seen many of these “slice of life” movies and both Dante and Randal learn a lot by the end of the film, but the comedic edge to the movie was unique at the time and we could tell that Smith had an original voice.

In “Clerks II” that black-and-white landscape is traded in for a color landscape once the Quick Stop burns down at the beginning of the movie. Sometime after the Quick Stop burns down we see Dante and Randal have found work at the fast food chain Mooby’s. If you know your Smith films, you’ll be familiar with Mooby’s, a cow-themed McDonald’s. As the film gets going, we learn that this is the last shift for Dante, who is moving to Florida with his fiancée Emma (Jennifer Schwalbach Smith). Dante can’t be happier to leave New Jersey, and get the house and manager’s job of a car wash, all seemingly handed to him by Emma’s father. Dante has wanted to really start his life, something that has seemed to have whisked by. Dante is having a mid-life crisis, he feels guilty that he has never done anything with his life and that he has been a minimum wage guy his whole life. But he is harboring a secret, something that involves his boss Becky (Rosario Dawson), and that secret could be the only incentive that keeps him from moving away. All the while Jay and Silent Bob hang out outside.

It is a surprise that both O’Halloran and Anderson are not bigger stars because of these movies. They both have lots of talent and they make the movie worthwhile in every frame. I especially like O’Halloran and I wish he had more leads in comedies; he has incredible range and can transition emotions with ease. Adding Rosario Dawson to the roster was a genius move and she gives this film an extra boost of awesome. Smith and Mewes do great work as Jay and Silent Bob. The film also features funny cameos by Ben Affleck, Wanda Sykes and Jason Lee.

But, what makes the movie great is how the film mixes raunchy comedy, slapstick comedy and offbeat comedy into one incredible package. There are moments of this film that are downright demented, but the heart under the surface of the film is as pure a message as any. This is a movie that tells us that it’s to be whoever you want to be, no matter how insignificant that something is. It tells us that you should not run away from something that makes you happy. That we shouldn’t pay attention to how successful everyone else is, because we measure success in different ways. Some people measure their success by how much money they have, while others measure by their rich relationships with the people in their lives and the little things that make them happy. “Clerks II” relishes the latter of those preferences and it is something that is hard for me to ignore. A wonderful comedy you should check out.

Oh, and Elias, played by Trevor Fehrman is the heart of the whole film.
Posted by Shawn Hoelscher at 7:22 PM