I just got done discussing the Marvel Panel which took place at Comic-Con International over the weekend. Now it’s time to get into the DC stuff. I know that I am a Marvel boy at heart, but I do still like DC and I have always loved Batman. I think the idea of Batman and Superman encountering each other on a live-action screen has been in the hearts of comic book fans for years. Now it’s happening to abruptly that I can barely contain myself. Not only will this be a Superman vs. Batman movie but an introduction to the DC Cinematic Universe and Justice League in particular.
Ever since this project began and Warner Bros. started casting their characters there has been controversy at every corner. Nobody liked the idea of Ben Affleck as Batman, nobody liked the idea of Gal Gadot as Wonder Woman. Heck, I’ve been giving them Hell over the Jesse Eisenberg as Superman’s arch-nemesis. But through it all, they have been full steam ahead on making this movie and making it as good as it can be. I have to say, I thought it was silly to not believe in Gal Gadot as Wonder Woman and I think the image they released over the weekend will shut the haters up: 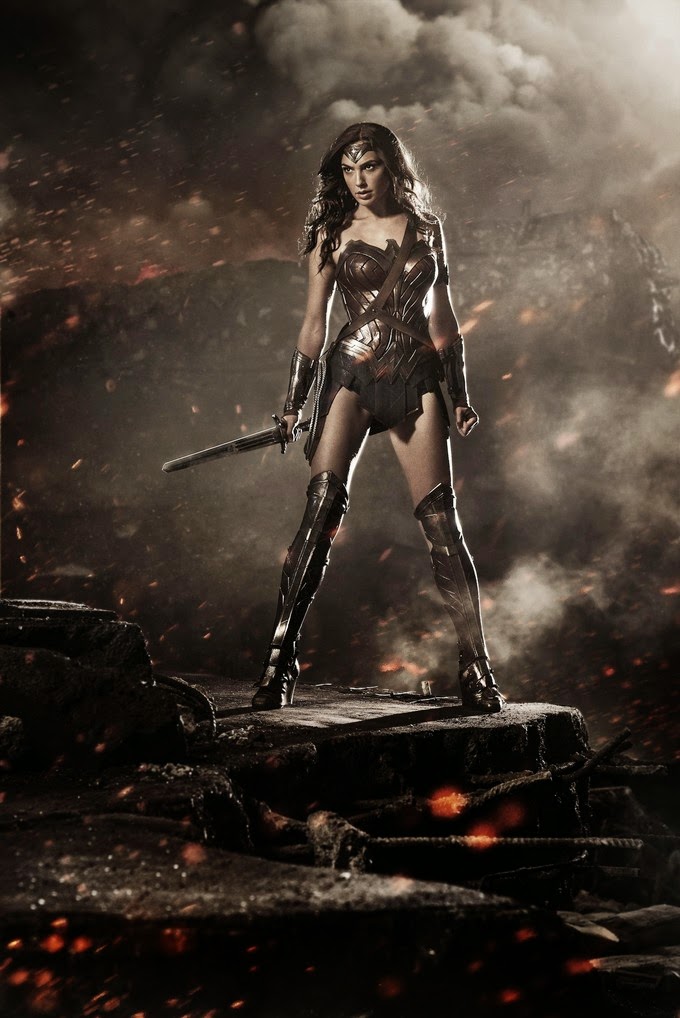 I already here fanboys getting into frenzies because her costume is not red, white and blue. But here are a couple thoughts, first of all it’s a dark picture so the coloring maybe off. Second of all, costumes evolve over time in the movies and perhaps by the time “Justice League” is released, so I don’t see a big reason to get all up in arms over this. Who knows? Maybe by the end of the film she’ll be in the uniform we know and love. But already I am digging how she looks.
The footage from Comic-Con was released on the internet yesterday for a very short time. If you were lucky enough to see that footage before it was taken off the internet, then you know how cool everything looked. If you missed out, I’ll tell you it was very short but sweet. We see Ben Affleck in his Batman uniform. Although it isn’t a usual Batsuit, it looks more like armor and his eyes are glowing white. It looks very much like a Frank Miller comic book come to life and that is what I dug most about the footage. Batman looks into the sky and turns on the Bat-signal and in the middle of the signal is Superman, hovering in the sky. Superman eyes turn red and he looks like he is ready to engage Batman. Batman doesn’t even flinch, he is ready for whatever Superman is planning for him.
And just like that, the footage ends.


No looks at Wonder Woman or Lex Luthor, or Cyborg, or Aquaman or anybody else in this movie. They haven’t been shooting for too long now so having anything at all was pretty cool. I think the footage turned several naysayers into believers, and I can honestly say that the next few years are going to be years to look forward too.