Overlooked Film of the Week- #61 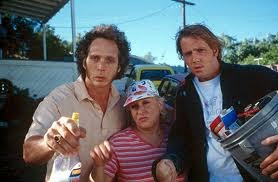 There are some movies that I identify with as the seasons change. What I mean by that is there are movies I love to watch during summer, winter, fall etc. Certain movies just feel like they go well with a particular season. I love to watch “Fargo,” during the winter for obvious reasons, just like I love watching holiday films during that time too. I feel as if most blockbusters come out during the summer because they remind us of summer. I could write all day long about which movies that match-up with which season, but I would hate to bore any of you. I bring this up because there is particular movie I watch every summer, because it doesn’t feel like summer without it. This movie is probably not what you expect it should be.

There is a scene early in the comedy “Drowning Mona” that really reminds me of the summertime and quickly gets me in the mood for the season. Bobby (Casey Affleck) is a landscaper and we meet him taking care of a lawn on a hot morning. While Bobby is hard at work, we hear Mungo Jerry’s “In The Summertime” is heard in the background. There is some funny stuff that happens during the scene and for some reason it affects me probably more than most people. I love the scene, it’s a great introductory scene and it just feels like summer.

“Drowning Mona” is discussed with scorn most places you go, but I find the film to be impeccably funny and quite effective as a comedy-mystery. There is a great mix of slapstick humor, sexual humor and offbeat humor that make “Drowning Mona” a delight to watch. I don’t quite believe in guilty pleasures, but I have no problem telling people how much “Drowning Mona” works for me as a film. The film keeps the laughs coming non-stop throughout the film. It features a cast that is ripe for comedic joy, a cast that includes Danny DeVito, Jamie Lee Curtis, Bette Midler, William Fichtner, and Melissa McCarthy, among others. What is most surprising about the film is that is clever with how it uses its mystery in the film and how it pays-off in ways I would have never imagined.

The film’s plot revolves around the murder of Mona Dearly (Bette Midler). Mona Dearly lives in a small town in New York and was detested by everyone. It is pretty clear why the whole town hated her, she was mean, cold-hearted, ignorant and arrogant. It becomes very clear to the authorities that she was murdered, so they go on the case to find her killer. But in a town full of suspects, how do you find the person who killed the town witch?

The reason why “Drowning Mona” is so funny and why it works as a film is because of the performances. Bette Midler is one of the best comedic actresses who ever worked in the industry. She brings her A-game to the role and she really relishes the crazy character she was hired to play. Everything we have grown to love about Midler as an actress is on full display here and it’s hard not to love her. I was also quite surprised by the work done by William Fichtner, an actor who generally takes on serious work. I mean look at him on “Prison Break” or “Armageddon” or “Strange Days” or “Elysium.” Heck, the guy is going to be the new Shredder in the upcoming “Teenage Mutant Ninja Turtles” movie for crying out-loud. Watching him actually be funny was a pleasant surprise. There is a small but hilarious appearance by Will Ferrell in the movie, and like in most of his movies, he nearly steals the show. The other work in the movie is also equally awesome.

The film’s mystery is handled in a fun way. In about the middle of the film, the killer reveals himself. You would think the film would end right there, but it keeps going and there are several other big reveals near the end of the film. Had the film not been so drenched in comedy, I wonder if it would have worked better for audiences. But how it is handled in the film is both highly clever and highly funny.

I think if you give “Drowning Mona” a serious shot, you just might like it.
Posted by Shawn Hoelscher at 8:21 PM