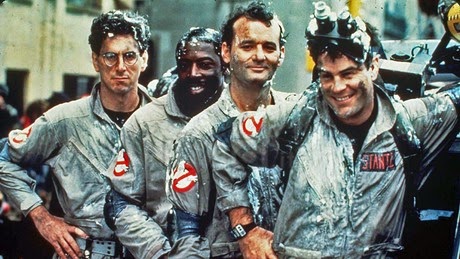 "Ghostbusters" was more than a movie for me. It was lightning in a bottle for me, it was the light-bulb over my head. If it wasn't for "Ghostbusters" I probably wouldn't be writing this blog, I wouldn't be immersed in film news and film watching on the primal level I am right now. I'd probably treat film like the average person does, and my voice probably wouldn't be given to the public right now. "Ghostbusters" is one of my favorite films of all time, and it has been nearly all my life. My personal top favorite films of all time changes over the years, but that film has held its spot and it will be apart of my life forever.

So when I read tonight that it is getting a 30th Anniversary Re-release this August, I was so happy that I almost wanted to scream. I don't know if its just were I live, but I really wish that older films got re-releases more often. The reason why I have an "Essentials" column every week is because I don't think the conversation about film should only be about the big, loud now. There is a whole history of film out there, and I believe that all should be part of the conversation as well. I think we all should strive to see the old as much as we do the new, but that is just me and that is part of my mission of this blog.

Being able to see one of my all-time favorite films on the big screen sounds like heaven to me, since I wasn't alive yet when it was previously released. August 29th is the date of the re-release and that date can't get here soon enough, then on September 16th a special blu-ray edition of the "Ghostbusters 1 & 2" will be released! For as much as I love "Ghostbusters," I don't have a blu-ray copy yet, so I will be very eager to pick that up.

For fans of any and all film, I strongly suggest you mark your calenders for these two important dates!

Posted by Shawn Hoelscher at 7:36 PM