I have liked that we have only got faint whispers of what Zack Snyder's "Batman vs. Superman" project is going to look like. Yes, we have got plenty of casting news, but nobody has been seen suited up yet. We live in a world full of spoilers, it is often hard to go into entertainment pieces completely clueless. I do appreciate that there are some artists out there that like tease us without giving everything away. I like the little pokes and prods that artists like to approach us with every now and then, and it seems Snyder is one of those artists.

One thing that has been confirmed tonight, we will get a look at the Batmobile that Ben Affleck will be driving around in when "Batman vs. Superman" gets released in 2016. The Bat-fan in me can't resist, this is awesome. I was a little hesitant, like most of you, when it was announced that Affleck would play the character. But, it is slowly but surely beginning to grow on me. Plus, the two most iconic superheroes of all time finally sharing live-action moments together on the big screen? That's a huge deal, a huge deal for DC, a huge deal for Warner Bros. a huge deal for humanity! Okay, maybe not humanity, but you have to admit, it is pretty cool.

So like I said, this is just a tease. But its a great look. We will get a full look tomorrow night, so stay tuned to get a great look at the new Batmobile. 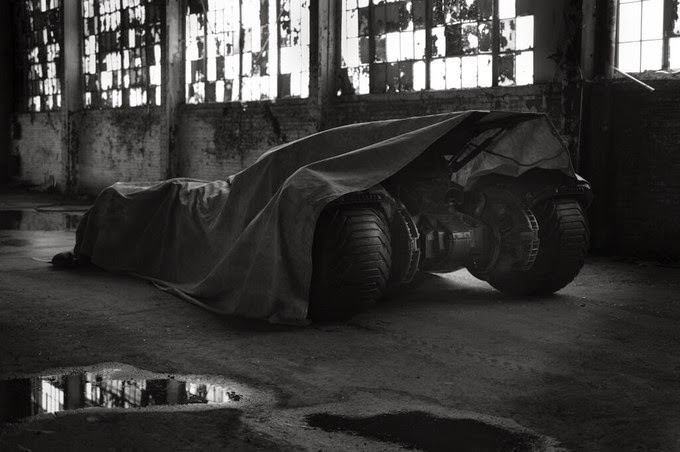 Posted by Shawn Hoelscher at 5:14 PM