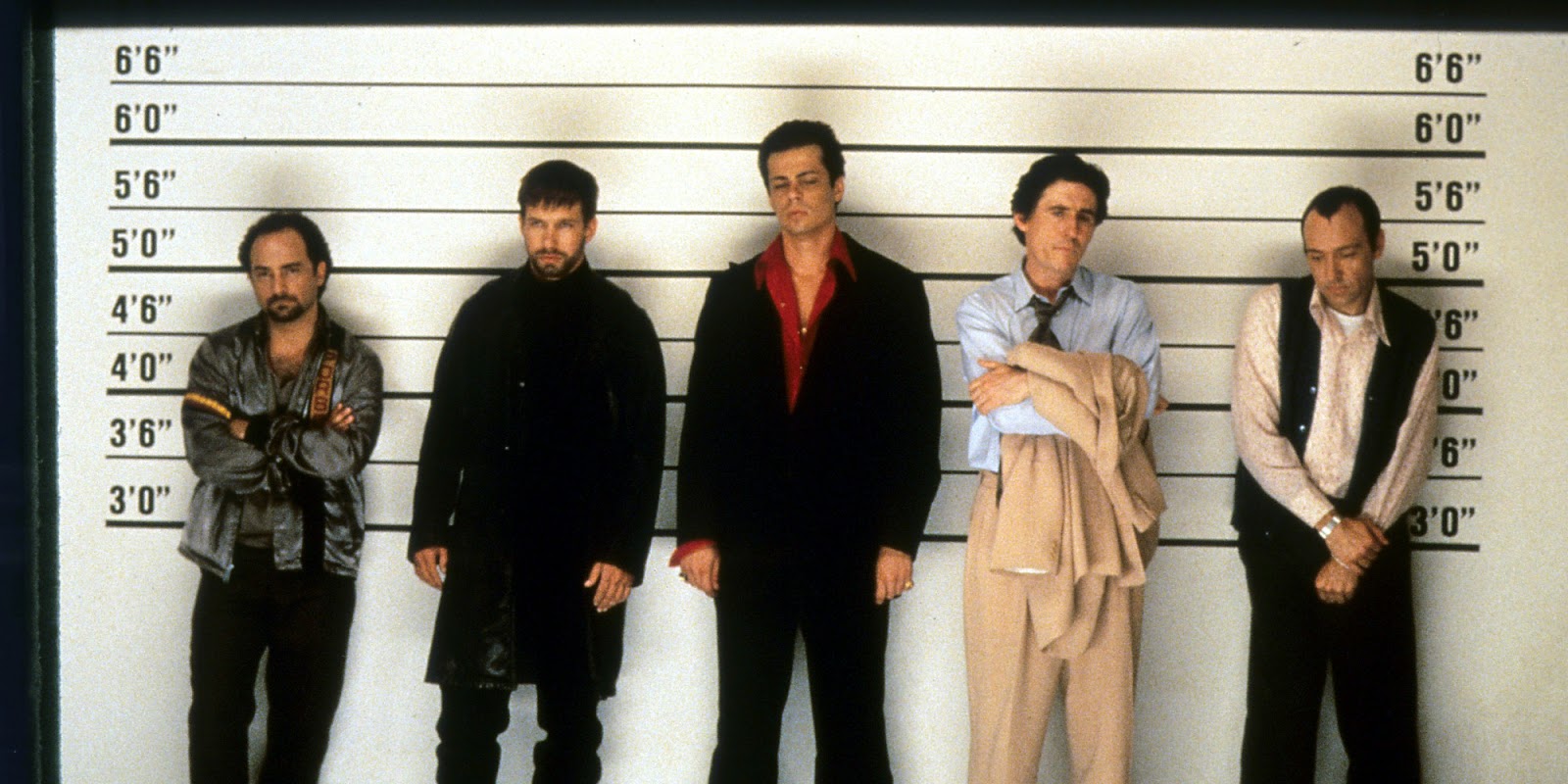 I don't know if there are many of you who haven't seen "The Usual Suspects" yet. Its one of the first examples of a great puzzle movie. Its also defined the surprise ending in the 1990's. I always loved a movie with an ending that punched you right in the gut. An ending that forced you to rethink and reinterpret every single thing you just saw. I live for those types of movies, and "The Usual Suspects" was one of the earliest examples of it. "The Usual Suspects" works on several levels. It works as a brain teaser and it works as a gritty crime drama. Its got a cast of actors that could arguably be an example of the right people coming together for a movie, net necessarily the best. Kevin Spacey, Gabriel Byrne, Stephen Baldwin, Benicio Del Toro, Kevin Pollak, Peter Greene and Peter Postlewaite were the "whose-who" of supporting actors from that decade and they absolutely nailed it.

The film begins on a boat, and the boat is littered with bodies. We see Gabriel Byrne laying on the main deck's floor, he doesn't look like he's in good shape. Something has ignited a stream of gasoline to light up in fire, and just as it is about to ignite the source, urine stops the fire. Byrne and this mysterious man have a conversation, something that will play into the mystery of the film later. After this scene on the boat is done, we go back in time a bit. We learn that Dean Keaton (Byrne), Verbal Kent (Kevin Spacey), Fred Fenster (Benicio del Toro), Michael McManus (Stephen Baldwin) and Todd Hockney (Kevin Pollak) have been chosen as suspects for a stolen merchandise vehicle. Each of these men are hardened criminals, but none of them stole the vehicle, this brings them together to do crimes together.

Everything seems to be going well once a mysterious lawyer (Postlewaite) shows up on behalf of Keyser Soze. According to the lawyer, each of the men have stolen from Soze, so they will do a dangerous job for Soze or Soze will kill them and people these men are connected to. Keyser Soze is a crime myth, a legend, somebody nobody believed truly existed. But these five men all have lots on the line, so they plan to pull off the mysterious job, and get to the bottom of the Soze myth.

Kevin Spacey really stands out in this movie. Verbal Kent is one of the only survivors onboard the bloodied boat from the film's opening, and the entire movie is told from Kent's point-of-view in flashbacks. Spacey's work is well-done, narration-wise and acting-wise. Benicio del Toro isn't in the movie as much as the other actors, but he is a scene-stealer in this. Byrne also has a pretty lengthy time on-screen and he really makes the most of all his scenes. He does outstanding work, and he stands out the most of all the actors. Pollak and Baldwin also do spellbinding work that is all well-done.

The film's ending is a huge shock to the system. "The Usual Suspects" does not cheat the audience, it does not leave specific information until the very end. "The Usual Suspects" is very smart about how it reveals its big secrets at the end. This is a world where nobody is who they seem. Nearly every character, including our ragtag, criminal protagonists, all bear secrets from each other. How the audience learns these secrets and how director Bryan Singer slowly, but surely reveals his secrets is superb. The ending and how its build up is very calculated and incredibly relenting. If you have not seen this movie yet, check this out and crank it up.

There have been many movies made with "surprise endings" that never lived up to the rest of the film, but "The Usual Suspects" does not suffer from that. Its a movie that is a great action movie, a great mystery, a great drama, and a great actor showcase. Its amazing just how much director Bryan Singer got right.
Posted by Shawn Hoelscher at 5:12 PM