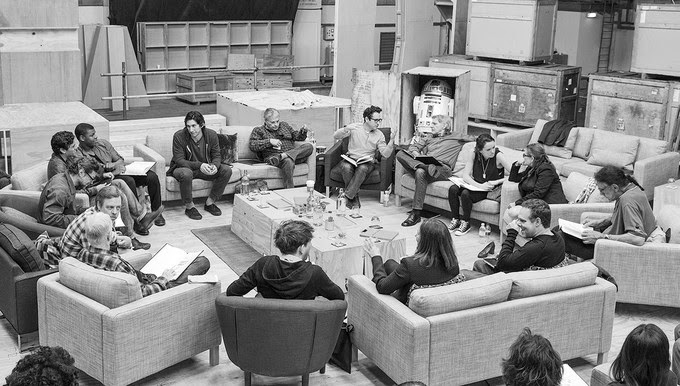 Besides the shooting schedule and a somewhat together release date, details of "Star Wars: Episode VII" has been kept under wraps. So tight have the details been for this film that it makes this reveal even more exciting. I understand why all the secrecy of course. This is "Star Wars," a version by J.J. Abrams of all people. J.J. likes to keep us all on our toes, and for "Star Wars?" Who wants all the rabbits out of the hat at a drop of a dime? Right now, I can't even imagine what this film would even look like. Sure, there are books and video games and comics out there that dig into the expanded universe of "Star Wars," but George Lucas has stated on occasion that the only content that is canon to "Star Wars" is what happens in the movies. That basically means that Abrams can do whatever he wants with these characters and get away with it. I like that, I like that he can start from scratch from a creative point. Abrams has had me guessing for awhile, and I still can't imagine where this is going.

The announcement of official casting details has been displayed today. There are some casting options that seemed set in stone, while there are some big surprises too. From the picture above, you can see Harrison Ford, Mark Hamill and Carrie Fisher, so we know that Han Solo and the Skywalkers are back. We knew about a month ago that Peter Meyhew would be returing as Chewbacca and so are Anthony Daniels as C-3PO and Kenny Baker as R2-D2.

What comes next is what is really exciting. It seems that the rumors for Adam Driver are true, as he is seen in the picture above. It also appears that John Boyega from "Attack The Block" is in the movie, and so is Golden Globe nominee Oscar Issac!! Plus, Andy Serkis and Max Von Sydow have joined the mix. That's right, Gollum and Father Merrin are going to be in a "Star Wars" movie.

What new adventure lays before our old band of heroes? What kind of villain will Driver be playing, if he is still a villain? What will our newcomers bring us? This is all incredibly exciting, now my curiosity is in overdrive, unable to process this information. One thing is for certain, Abrams has put together a wonderful cast, old and new alike. Now, the big question is, can he make a great movie? Can he put faith in those "Star Wars" fans who lost it all after the prequels were released? We shall find out on December 18th 2015. I'm getting in line now, who else?


Posted by Shawn Hoelscher at 6:43 PM