You've been voting for nearly a week and a half now. Finally, it is time to move onto the second round. Just like in basketball, there were some surprises and big upsets in the first round. Let's take a look.

On the top left hand side of the Bracket...The Action Heroes!

John Rambo (8) vs. Martin Riggs (9)
Two memorable characters with close seeds made for a challenging decision. With 54% of the vote, John Rambo moves onto the 2nd round. I guess it helps to be a loner sometimes.

Ripley (5) vs. Lee Christmas (12)
With 87% of the vote, Ripley moves past Lee Christmas to the 2nd round, Christmas was right all along, can't beat a classic.

Indiana Jones (2) vs. Chan Kwok Wing (15)
In this memorable clash of East vs. West, it was Jones that made out on-top with over 85% of the vote. Always helps to be apart of the Greatest Generation!

Tony Montana (1) vs. Bonnie/Clyde (16)
Tony Montana proves once again that he is "the bad guy" and can "take all the fucking bullets!" with almost 100% of the vote, Montana beats Bonnie and Clyde for the 2nd round.

El (8) vs. Marv (9)
I suppose it helps when you come up in the most dangerous city in the world. With 94% of the vote, Marv strangles El out of the 2nd round.

Snake Plissken (5) vs. The Driver (12)
Even with being a good driver, nothing could stop Snake from getting 89% of the vote to get to the 2nd round!

Tyler Durden (6) vs. Anton Chigurh (11)
In the first big upset, Anton kills it with 67% of the vote to beat out Tyler Durden.

Harry Callahan (3) vs. The Bride (14)
In one of the closest battles with 59% of the vote, The Bride upsets Harry for the win. I guess he wasn't dirty enough.

Oh Dae-so (7) vs. The McManus Brothers (10)
In another hard fought battle, Oh Dae-so moves past The boondock saints with a little under 60% of the vote.

Jules Winnfeld (2) vs. Paul Kersey (15)
Kersey has defeated many enemies, but one. With almost 100% of the vote, Jules shoots past Kersey for the win.

Sam Spade (8) vs. Kikuchiyo (9)
There must be something about the blades on this bracket, with 56% of the vote, Kikuchiyo strives onward to the second round.

Nameless (5) vs. Doc Holliday (12)
Between these two cowboys, it was tough. But with 58% of the vote, Nameless shoots down Doc Holliday for the 2nd round.

Rooster Cockburn (4) vs. Daniel Plainview (13)
Cockburn gave Plainview a milkshake to drink as he took 80% of the vote to the 2nd round!

Atticus Finch (6) vs. Lt. Aldo Raine (11)
In a huge upset, Aldo Raine scalps Atticus Finch for the second round, taking 60% of the votes. I guess nice guys do really finish last.

William Wallace (3) vs. Pvt. Jackson (14)
As good a shot as Jackson is, he couldn't hit his target this time. With an overwhelming 95% of the vote, William Wallace gallops on to the 2nd round!

Maximus (2) vs. Chichanghook (15)
The gladiator puts himself to the test against the American Indian and succeeds, taking 80% of the vote with him.

Han Solo (1) vs. Ironhide (16)
No surprise here, Han Solo takes nearly 98% of the vote against Ironhide.

Darth Vader (5) vs. Selene (12)
The Force was with Darth Vader this week and vampires are not immortal. Vader advances with 89% of the vote.

Wolverine (6) vs. Blade (11)
Whether they are vampires or half-vampires, they are not doing hot on this bracket. The great Wolverine takes 85% of the vote.

Predator (7) vs. Katniss Everdeen (10)
Katniss has hunted many things and won many tournaments, but she was no match for the Predator as they took 74% of the vote and the win over Katniss. The odds were not in her favor.

Those are the results, start voting for the second round now. The voting will last until Sunday, March 30th So get your votes in now! 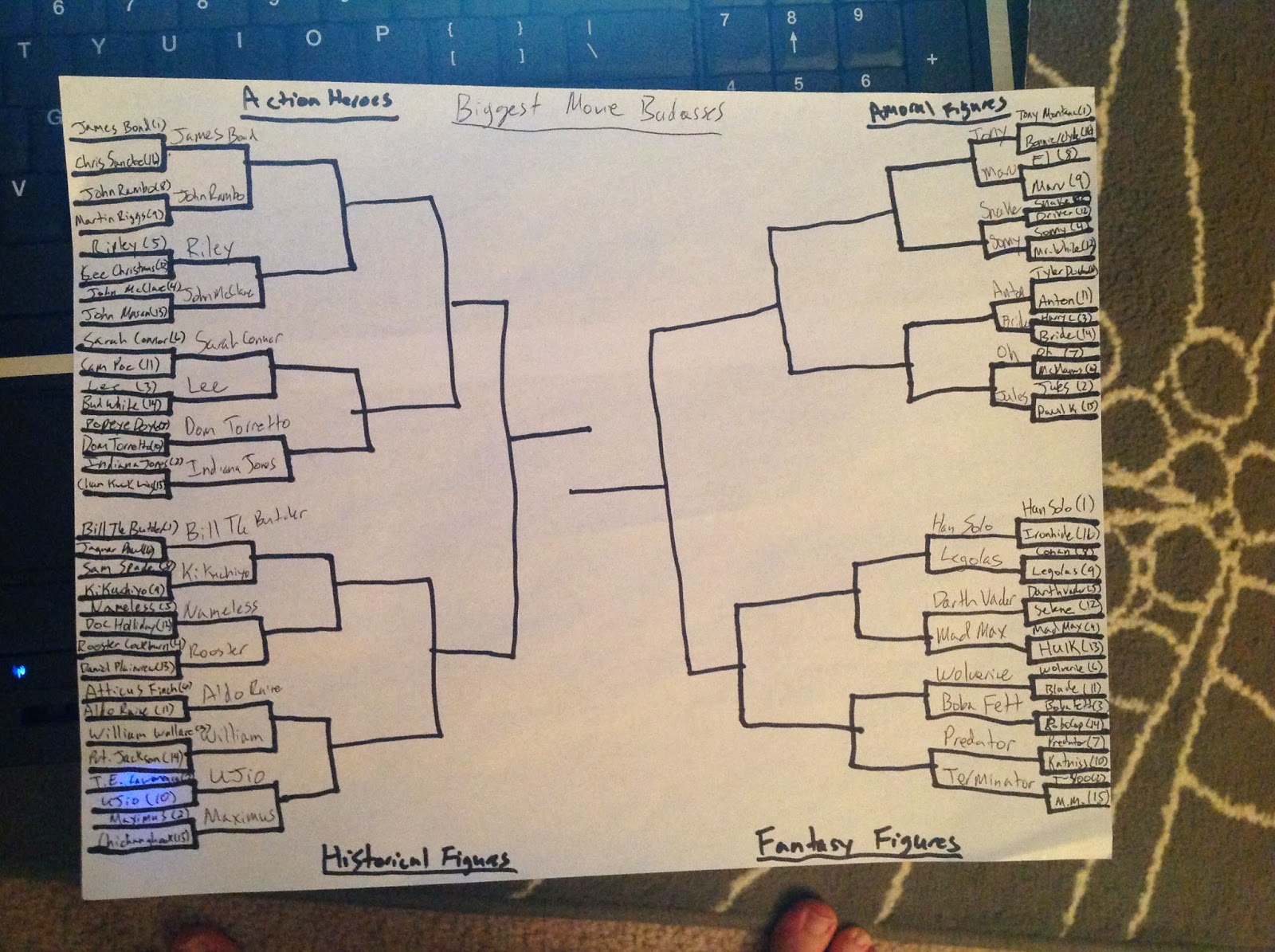