Guess Which Pixar Movie is FINALLY Getting A Sequel... 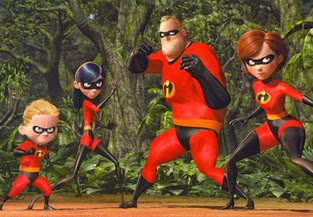 Arguably, I think Pixar Studios really helped Disney stay afloat throughout the 2000's. It was that studio that was really keeping Disney animation unique. They created fresh stories full of humor, charm, heart, and smarts. It was truly amazing and remarkable in equal measure what the studio was able to do, and what they still do now. Recently, the studio has been churning out prequels and sequels to their big successes, creating tentpoles and brands rather quickly.

My favorite Pixar movie to date is easily "The Incredibles." I think its pretty easy to understand why if you know me well enough. A Pixar movie about a team of superheroes made by the guy who directed "The Iron Giant," how was I not supposed to like that? I loved "The Incredibles" so much that I was completely blown away that a sequel was never discussed. I mean we got two "Toy Story" sequels, we got "Monster's University," we got "Cars 2" and we are going to get "Finding Dory." How in the world is "The Incredibles" not getting another adventure? Sure enough, ten years later, a sequel to "The Incredibles" is finally happening.

The thing is, a lot has changed since the studios hayday in the 2000's. We have seen the sequels to Pixar's big films, and they are not holding up in the same form as their predecessors (not including "Toy Story"s sequels, those rule.), it actually seems the studio has been downgrading for a few years now. Would a sequel to "The Incredibles" really be worth the effort if it won't even hold a candle to the original?

Here's a way to make the second better, hire Brad Bird again. The guy made a great first film and he's proven over the years that he is an incredible director. Let him direct a sequel and let him mold a story worth telling with the characters. I think that will make all the difference. Keep this as close to the original as possible and I think this sequel will be rewarded.

"The Incredibles" was one of the very best films of the 2000's, it deserves an even better sequel. Lets hope we can get it. Right now, let's just celebrate that we will be returning to these characters and this world once again.

Posted by Shawn Hoelscher at 6:03 PM