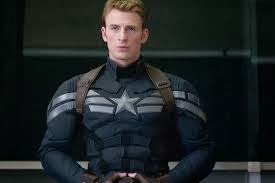 There are very few movies that are around the corner that I desperately need to see. The obvious one is the second Captain America movie. I don't think there was ever any doubt. I am huge Marvel freak, I prefer Marvel to DC. You can tell from my blog that I don't HATE DC, and I'll be prepared to tell you everything DC has ever got right over its lifespan, but the characters from Marvel are hard to beat in my eyes. Which is why I want everything they do to be successful. I want everything they do to be awesome. Right now though, all I have to say is that this is the perfect time to be a Marvel freak.

By and large, I think the Marvel Cinematic Universe has been a very successful project, financially no doubt but the story-telling has been well done too. It sure seems to me that we are going to get some big reveals in the upcoming sequel. If you are still paying attention to "Agents of S.H.I.E.L.D." on ABC, things are really starting to get exciting. If you stopped on the show, I understand, but I encourage you to take a look at the newer episodes, I think the show is finally starting to find its footing and it couldn't come at a better time.

Now that I couldn't be more excited for "Captain America: The Winter Solider" early reactions have poured in this weekend. And everybody seems to really love it. This has put my excitement and anticipation in overdrive.

"CAPTAIN AMERICA: THE WINTER SOLDIER is right up there as one of the best Marvel movies ever. Epic and full of great surprises for fans."
- Don Kaye

"CAPTAIN AMERICA: THE WINTER SOLDIER: Phase 2 is 3/3 for me. Anthony Mackie has finally found that breakthrough role."
-Damon Houx

"Captain America: The Winter Soldier is absolutely incredible. Best action in a Marvel solo movie and perhaps the best of them all - around."
-Eric Eisenberg

So there are you have it, and these aren't all the reactions either. If you need further proof to check this out hop on over to ScreenRant and read what everybody else is saying. All I can say is that I can't wait and we only have a few weeks left!