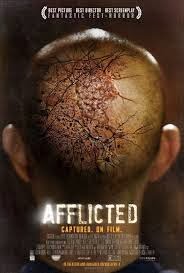 Earlier this year, when I was discussing a massive list of films I was anticipating this year, I mentioned "Afflicted." Its a film that widely praised and hyped after last years Fantastic Fest in Austin, TX. When something gets so hyped by a people who really dig into the horror genre, its bracing for me. I love the horror genre, and when its done right, its startling. I hope this film can live up to its expectations. Its first trailer was released last night, and we know that it will hit VOD on April 4th, a Friday that is shaping up to be a great day for movies.

Once you view the trailer, you'll notice its found footage. I know many of you are a little tired of found footage (I know full well that's an understatement.), I just hope you don't let several bad eggs ruin a gimmick that can be effective. I am open to found footage so long as its used thoughtfully, emotionally and staged correctly. When something sticks in Hollywood, it really, REALLY sticks, so I try to be as open as possible. The word-of-mouth is big for this one, so it maybe worth looking for.


Posted by Shawn Hoelscher at 7:02 PM