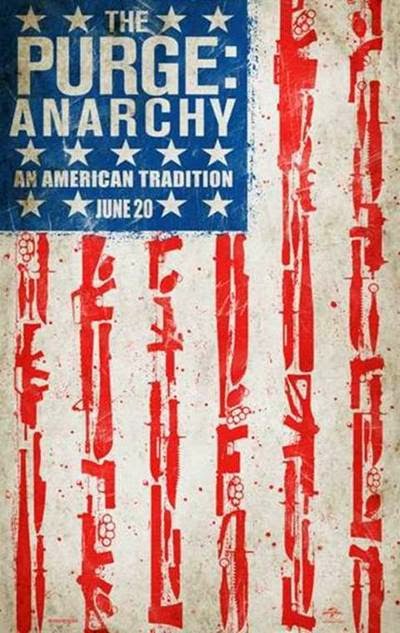 Despite being a completely disappointing and mind-numbing experience, Universal Pictures planned a sequel to last year's "The Purge," a horror movie about one night a year where all crime is legal, including murder. If you remember from last summer, I completely hated the movie. I put the film on my ten worst films of 2013 list, I thought it utterly missed the boat on something that could have been an intriguing political/social satire. Why with a premise like the one presented in "The Purge," would you just make a standard home invasion film? Plus, for a horror film, it wasn't scary. At all.

Alas, "The Purge" was a surprise hit last summer, so director James DeMonaco has written and directed a sequel entitled "The Purge: Anarchy." This year, a couple driving home on Purge Night will experience a broken down car on the worst night possible. Again, I can't stand that this idea is being set up for a horror film. Again, I can't stand that the purgers who inevitably happen upon the couple are wearing masks. Why would people wear masks Purge Night is free game on all crime for 12 hours?

Despite DeMonaco revisiting some of the first film's big flaws, there is still some intriguing stuff going on in the trailer. It looks like the story involving the couple and the broke down car may be part of the film. As there are other scenes that don't seem to really connect to that story. It also looks like this sequel will bring tons more mayhem. Telling from the trailer, it looks like fire, motorcycles and what looks like armored cars will be part of the story in this sequel. This has a chance to be much more fun compared to the original, so maybe its worth checking out.

I am willing to give this sequel one more shot before I officially call it quits on this franchise. This has chance being fun, and sometimes a chance is all you need. There is potential in this idea, and my hope is that DeMonaco carefully digested the negative critical buzz of his first film and created a sequel that improved on it. That's what we as the audience can only hope for. There is still a chance this series could turn around.


Posted by Shawn Hoelscher at 6:15 PM