Well, this morning the cast for the much-anticipated "Fantastic Four" reboot was released to the public. While the stars have not actually signed any contracts at this point, the sources I am reading are near-certain this is the cast and that it is a done deal. Out of all the upcoming superhero movies within the next few years, I have every single finger and every single toe on my body crossed for this reboot. The general public will find this hard to believe, but the Fantastic Four are great characters. In comic form, they are some of the most important and influential people in the Marvel Universe and they have been involved in many great stories within the universe. I just wish we could get a film that highlighted that.

Fox has been meaning to reboot the franchise after the first two original films flopped terribly. I was immediately on-board when they told us that Josh Trank would direct the reboot. If you are unaware of Josh Trank, go rent "Chronicle" right now, as it was one of the biggest surprises of the new millennium.  One think Trank proved with that film is that he could handle superhero action well and he create believable relationships with his characters, both of those are central to making a "Fantastic Four" film work.

So then we had a director, and today we get our potential cast. The cast is not at all who I would have thought. 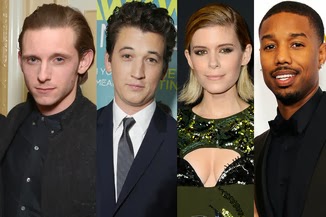 From left to right, Jaime Bell will be Ben Grimm, Miles Teller will be Reed Richards, Kate Mara will be Sue Storm and Michael B. Jordan will be Johnny Storm.

First of all, they had rumored for awhile that Fox was going younger with the cast. I thought that was a big red flag. I feel the Fantastic Four needs to be sophisticated to a degree, I don't want this to become a "Twilight" or a young, melodramatic mess, which tends to happen with younger casts. But, whether we like it or not, Hollywood is obviously trying to make sure they can get these guys for several films if need be. I just hope they know what they are doing.

Despite a young cast, they at least found some good young actors. Miles Teller proved in "21 and Over" that he can be a complete goofball and he also proved in "The Spectacular Now" that he has dramatic depth, which would be big pluses for Reed Richards if handled right. Micheal B. Jordan as Johnny Storm was not surprising to me. He was in "Chronicle" and he has worked with Teller before. I am sure he will be great here as Storm. Kate Mara has received some real traction in "House of Cards," a show I really dig and she's great in it. The biggest question mark of the cast is Jamie Bell as Ben Grimm. Ben Grimm eventually becomes The Thing. Bell, while extremely talented, is not even close to the actor I'd picture for The Thing. Will Fox go the "Lord of the Rings" route and completely mokap Bell? And will Sue and Johnny storm be adoptive siblings in this reboot, or will they be related at all?

There are huge questions circling the choices being made here. All I can hope for is that we finally get a good Fantastic Four movie.