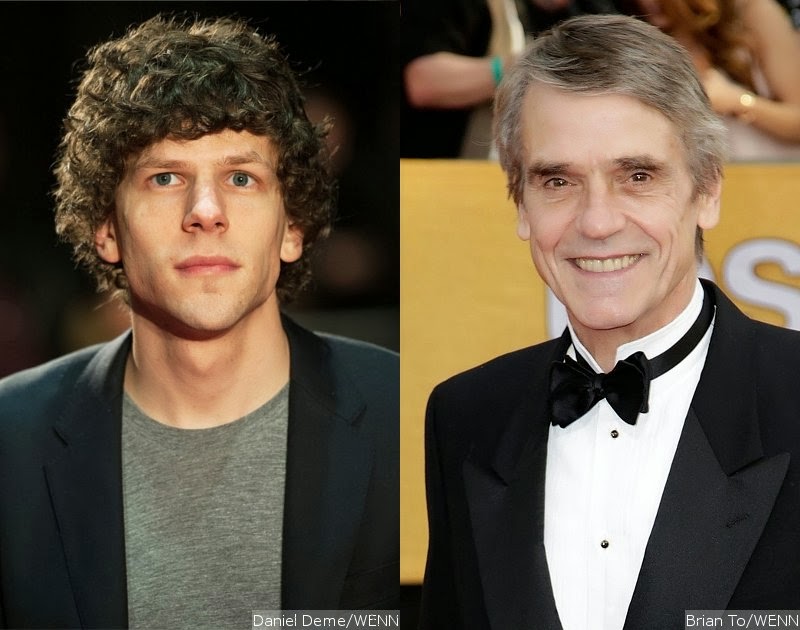 See the picture above? You are all looking at your next Lex Luthor and Alfred Pennyworth for the upcoming "Man of Steel" sequel. From left to right, that is.

I remember when Ben Affleck was announced as Batman a couple months ago and when Gal Gadot got the Wonder Woman gig for the sequel too. Those casting choices were hotly debated with bile being spewed on both sides of the fence. This time, I can't see how anybody could support this type of casting. Words can't express how wrong I feel Jesse Eisenberg as Lex Luthor. I downright hate the casting choice, hate it. I cannot believe that this is the course the WB has set for itself. I don't know what Snyder saw in Eisenberg that made him think Lex Luthor, maybe it was too much "Social Network?" Because let's face it, Eisenberg is going to be channeling Mark Zuckerberg for this role, no two ways about it. Lex Luthor has quite a few similarities to Mark Zuckerberg; both men got their billions young, both men have generally positive appearances in public. Except Luthor isn't particularly a nice guy, and he Luthor isn't afraid to get his hands dirty. But at this point, is Eisenberg getting type-cast? It sure seems that way.

I have already read that many people are comparing the casting choice to Heath Ledger and The Joker. Yes, Ledger was deeply panned as The Joker and that turned out to be a great performance. The thing is, you have to ask all the Ledger haters if they had really explored the deceased actor's filmography before arriving at their opinion. In both "Brokeback Mountain" and "Candy," Ledger proved that he had range and that he had talent. So, when the casting was announced so many years ago, I was curious and intrigued by Heath Ledger getting the opportunity to play The Joker. Ledger was not just a hot guy for the ladies or a teenage heartthrob, this guy was acting. I don't think I can say the same about Eisenberg. The only emotion that he's come close to paralleling with Luthor is that he play smart. But smart isn't what makes Luthor unique. Eisenberg has an annoying voice, he's got crazy hair, he's very lanky, he doesn't hold an intimidating presence. A lot of what makes Luthor who he is, is his presence. I just can't see Eisenberg showcasing any of this. I feel his voice will ruin the character before any script issues do.

As for Jeremy Irons, well I bet he'll do well as Alfred. Jeremy Irons is a great actor, and you don't need me to tell you so. I just feel giving Irons the part of Alfred is a little...disappointing. If they gave Irons the Luthor role, well that would have been something. Or any villain in the DC Universe would have suited Irons better. Irons has a classic voice, a big presence and the talent to back all of that up. But, Irons hasn't had too many opportunities to show his good side, Irons is always a villain mostly. So perhaps Irons as Alfred will be a refreshing change of pace for the actor. I can live with it, I am disappointed, but I can live with it. I am sure Irons will rock the role, no matter how much screen-time he has. Like I said, I can live with it.

But I cannot, cannot live with Eisenberg as Luthor. Just wrong.

I can support Affleck as Batman, I am curious about Gadot as Wonder Woman and I can get over Irons as Alfred. But Eisenberg as Luthor is leaving the worst taste in my mouth. Its just so sad.

I know, I know. I should not get all up in arms about anything until I see a trailer. And a trailer is way off at this point. I hope Snyder found something special in Eisenberg, and that he taps into it and that I eat my words. But somehow I feel like that won't be the case. My excitement for this film has been a rigorous rollercoaster. I can't remember the last time a casting decision for a huge tentpole film like this made me this venomous, but Eisenberg really?

We'll just have to wait and see. I've been wrong before. I could be wrong.

But I doubt it.
Posted by Shawn Hoelscher at 2:05 PM