Is it too early to get excited?

Last week, I reported on the official shooting schedule for "Star Wars: Episode VII." Just the shooting schedule alone is enough to get all us movie fans in a frenzy. This space opera saga defines movie fandom for many people across the globe, and the aspect of another set of "Star Wars" films is more than bracing.

Its so bracing that a shot of crewmen from the film is getting fans in an uproar. 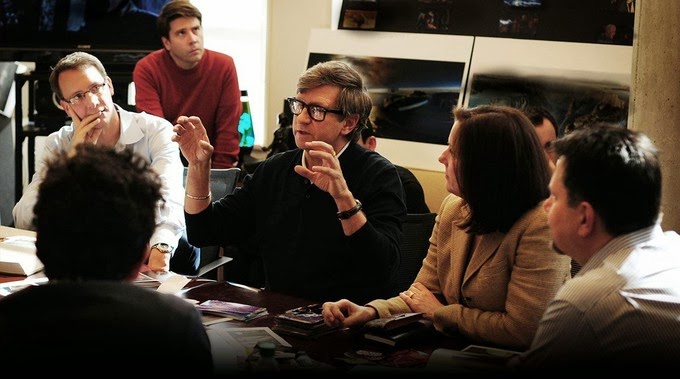 This one photo has caused more buzz in a few days than I think anything ever has in cinematic history. This a meeting between director J.J. Abrams (far bottom left), producer Kathleen Kennedy (the only woman in the shot) and other production crew and producers for the film. Whats interesting here, and what has been the cause of lots of buzz, is the set of pictures in the background. A picture of the Millennium Falcon is clearly scene. We also get a few shots of terrains.

There are already mad rumors about what this all means. Could it be that the Millennium Falcon maybe used in episode VII? It is very well possible. Nothing is out of the rule of possibility. We have no idea where the story will go, we have no idea which characters are in and which ones are out. Like I said in my article above about the shooting schedule, Abrams and his crew are possibly cooking up a story free from the novels, comic books and video games made about "Star Wars." Another idea though, is that the photos behind this group of artists are just to help mold and brainstorm the story they have in mind. Any of these possibilities are valid, but that doesn't make anything less exciting. Whatever these guys plan, I'll be waiting opening weekend, and I don't think I'll be the only one.

While we are on the subject, I'd also like to bring up something cool. Today, we got two teaser trailers for an upcoming cartoon Disney has planned. The cartoon is called "Star Wars: Rebels," and it will premier on Disney XD sometime this fall. The story will take place between "Episode III" and "Episode IV" and will focus on a renegade Jedi being hunted by the Empire as they plan to destroy the last of the Jedi. The show will also feature the early days of the rebellion. The lead role will be voiced by Freddie Prinze. Jr.

I know its a cartoon and I know its on Disney. But I think I'll give this series at least a look. I am so far in Star Wars overdrive that it would be hard not to check it out.

So what are your theories about the meeting photo? What do you think of the teasers for "Star Wars: Rebels?" Sound off in the comment section below.

Posted by Shawn Hoelscher at 8:26 PM