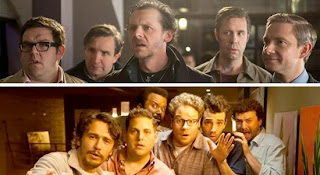 If you are tuning in for the first time, I posted my Thirteen favorite films of 2013 last night. Tonight I'll be posting my list of my top ten runner ups. This is a list of movies that got the closest to making the final list. Making these end-of-the-year lists, is always fun for me, but sometimes its hard. Sheesh, I shouldn't say "sometimes," it's frequently hard for me to put these lists together. Especially in a year as good as 2013. The entire month of December, I began to decipher what I would and would not include on these lists, and titles got pushed up and down in the process, what it boils down to is listening to my inner voice, to make the hard choices. The point of a runner ups list for me is to showcase the films that were very awesome, but there were just other films that resonated a little more with me. The runner ups list is an alternate top ten. A list of films that I could have easily subbed in had a few titles in my main list not get made.

To honor such distasteful decision-making, I am also posting a "Worth Mentioning" list, which will include all the films I heavily considered for both lists, but missed both. I love the world of film, that could not be clearer. I also hate limiting myself, and I think every film that makes a huge impression on me should get its moment in the sun, so I'll be listing all the films that will make onto my personal movie shelf, at some point or another. And I only like to get movies I know I'll watch again, otherwise it feels like a waste of space!

With no further ado, my 2013 Runner Ups list, in the same format as last night.

10. The World's End
Its easy to watch "The World's End" and pass it off as a fun, kinetic exercise in action-comedy. But out of "Shaun of the Dead," "Hot Fuzz," and even "Scott Pilgrim vs. The World," I think director Edgar Wright made his deepest film to date. Is it fair to say that we are a culture that is nearly-defined by nostalgia?  I think its a fair question to ask, there are many people who trapped by the confines of yester-year that they are unable to move forward. I think captures that expertly in his film. Simon Pegg's Gary King, is a douche for almost the entire run-time, and the moment he hangs onto seems to be his only reason for living. There is plenty of humor in the film, but its tough not to be effected by the message. For that, this is quite possibly Wright's best film to date, now bring on Ant-Man!

9. Graceland
Kidnappings are scary, what's even more scarier is what one would personally do if their loved ones were ever kidnapped. That premise is central to this Indonesian film, "Graceland" is the ultimate what-would-you-do film. It presents a situation, and we follow one particular character as he finds a solution to the situation. That situation happens revolve around a unemployed father as he watches helplessly as his daughter gets kidnapped. What was unexpected as well, was the crazy twist at the end that launched this film from very good to great, in my opinion. "Graceland" is a fast-paced, nail-biting thriller and it is quite riveting.

8. Europa Report
The year 2013 will be remembered as one that was filled with a wide variety of science fiction films. I loved being apart of all it too, especially when a great example came out of nowhere and blindsided me completely. That was my experience with "Europa Report," something I didn't expect, and is now something I can't forget. I know some people may not like this movie, as it is a slow-burn thriller with an ending that makes the movie. But if you stay patient, let the visual effects envelope you, let the great performances please you, you will find a lot to love about this wonderful sci/fi.

7. This is the End
When a film about the Apocalypse revolves around a giant list of comic actors who all play versions of themselves, its hard to take it all seriously. But the script by Seth Rogen and Evan Goldberg tells a story that was more piercing than it honestly needed to be. It tells a sincere story of friendships, and how we sometimes, mistakenly treat them whimsically. Adding such a touching story to a comedy with demons and exorcisms is so bananas that I can't believe it got made, but in the end, I am so glad that it did.

6. The Spectacular Now
I did not expect a movie about teenage romance to make such a huge impression on me, especially a movie featuring an actress I downright despise. But 2013 was full of surprises and I sat back and let those surprises wash over me. I think why I identified so much with the lead male is that I saw a bit of myself in him and I definitely felt nostalgic afterward. The movie doesn't just revolve around a teenage romance, its about growing up and coming-of-age, when your young and the whole world seems to hate you, you quickly find out that more people depend on you than you may realize. I think its a beautiful message, and its presented perfectly throughout this entire movie.

5. Wrong
I am not sure how many of you saw "Rubber" a few years back, about a tire with telepathic powers that went on a killing spree, but that film was made by the same guy that made this film. "Wrong" is just as bizarre as "Rubber." Its about a man who wakes up to find his dog is missing, and he spends the rest of the film looking for him. In a world where it rains in office cubicles, and palm trees suddenly grow into pine trees, anything in possible in this very weird world. "Wrong" may not make a lick of sense sometimes, but it never betrays its context. Its a film that is so confident in itself that its hard not to love. So far, Quentin Dupieux has created a strange world on film, and I am loving every minute of it.

4. The Kings of Summer
Because the best lessons in life are the ones you learn yourself.

3. The Hunger Games: Catching Fire
I am sure several of you are pissed right now that I never wrote a review for this one. Time got away from me and I wish I was ahead of curve on "Catching Fire." I snuck a viewing of this one in at the very last minute, and as you can see, I am glad that I did. This is a series that gets better as it goes along, and if the series finishes with a gracious one-two punch of Mockingjay...this will be one of the great film franchises of our time. Within the first five minutes of this sequel, the emotional hooks were in and I was in tears. Jennifer Lawrence and Josh Hutcherson are hypnotic in this sequel, as is the bright supporting cast. And just as I thought, Philip Seymour Hoffman nearly steals the show. This is everything one could have hoped from this trilogy of books, thank goodness!

2. Rush
Chris Hemsworth is becoming an actor to be reasoned with, and Daniel Bruhl is proving that his one-time stint with Quentin Tarantino wasn't just some fluke. The chemistry between these two actors is unbearably believable and set to the rugged world of 1970's racing, its hard not to love. Ron Howard has made several tremendous films in his career, and he proved in 2013 just how much we missed his unique vision as a storyteller. Here's to hoping he comes back sooner.

1. Captain Phillips
There is a type of biopic film that feels like a checklist of events in one figure's particular life, and those are normally boring to a callous degree. "Captain Phillips" is not that type of film, it focuses on the 2009 kidnapping of the sea captain, and after that director Paul Greengrass makes us feel every bit of tension from the situation. I also think that turning the Somali pirates into human characters instead of just "bad guys" was a genius move. This is a thriller that grabs you by the heart and slowly begins to squeeze. I would not expect anything different from the guy who made the original "Bourne" films.


With that, our look at the runner ups list is all done. Now all I want to do now to close is to take a look at all the films that I considered when putting each of my end-of-the-year lists together. As I said, I think every great movie deserves its own moment in the sun, so allow me to give them that moment. In a year like 2013, I could have made three separate lists and they would be full of films I treasure. These were the films that made list-making this year incredibly difficult.

Worth Mentioning
"Out of the Furnace" A tough-as-nails thriller, and who knew Woody Harrelson could be so scary?

"Coffee Town" A funny little comedy that will surprise you with its every minute.

"Stories We Tell" An insightful documentary about how we remember certain events, and how others around us do.

"Room 237" Proof that pieces of art mean something different to us all.

"Side Effects" A thriller in which nobody is safe, even the pretty-boy A-listers!

"The East" Who knew Eco-Terrorism could be so interesting.

"You're Next" Who knew slasher-horror could still be effective?

"Warm Bodies" Just when you think someone couldn't do anything different with the zombie genre, this little gem comes along."

"We Steal Secrets: The Story of WikiLeaks" A powerful documentary, even though not everything revolving the situation is resolved yet.

"Thor: The Dark World" The Marvel Cinematic Universe keeps getting better and bigger!

"The Wolverine" So glad that a good Wolverine movie was made before I died.

"The Sweeney" Even British detectives are badass

"The Lords of Salem" Thinking about this one too long still creeps me out, didn't know Rob Zombie had it in him.

"The Hobbit: The Desolation of Smaug" Benedict Cumberbatch's voice...is killer.

"Pacific Rim" Offers much more than just giant robots and giant monsters, but that's GDT for you!

"Fast & Furious 6" This is Hollywood's biggest Hail Mary franchise, and I hope it continues to expand.

"The Conjuring" Look kids, even movies without tons of blood and gore can be scary!

"Frozen" Disney returned to its classic roots, and in doing so made more cinematic magic.

"The Croods" In a year where not a whole lot of good animation came out, this one made it all seem effortless.

"Red 2" The most misunderstood sequel to come out in a long time, absolutely worth your time and attention.

"The ABC's of Death" Imagine a mini-film fest with a horror theme and that's this movie.

In conclusion, this sums up what I'll remember from 2013 and I could not be happier with it. Thanks for reading and continue to return for more fun.
Posted by Shawn Hoelscher at 8:31 PM