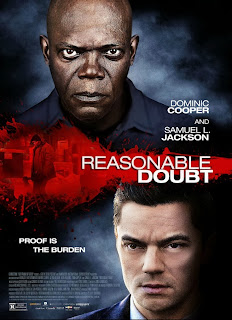 December is here, Christmas and other great holidays are all right around the corner and we get a glimpse of 2014 in film.

This month is wonderful fun on many levels, as a dedicated movie buff, I love looking at whats ahead. Past, present and future all very important and very dear to me. So I always get excited to see what is coming next year, and you better believe that I'll be posting a massive list of films I think you should look for in 2014 come January.

Right now, let's discuss the first trailer for "Reasonable Doubt," a crime thriller starring Dominic Cooper and Samuel L. Jackson, which will hit theaters mid-January. We all know Samuel L. Jackson, we all know he doesn't say no to anything. Sometimes that's a good thing, sometimes its a frustratingly bad thing. I can't really tell with "Reasonable Doubt." Its a tough trailer to watch, given that possibly the entire premise is revealed throughout the entire running time. Did the studio think this would be a good marketing strategy? Just showcase all the big reveals and plot turns in the first trailer?

I don't know, but I do like both Cooper and Jackson as actors, so perhaps they can elevate this material and the make the experience better than it needs to be.

Take a look below:


Posted by Shawn Hoelscher at 7:42 PM