From "Future Past" to Apocalypse? 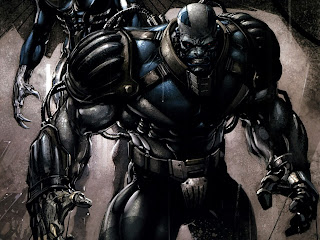 I don't know what triggered Fox's sudden interest and want to do the X-Men film franchise right, but I for one am very grateful.

Actually, that's a lie. I have somewhat of an idea of how this possibly could have happened. Back in 2000, there was a gentlemen named Tom Rothman who worked as the CEO of 20th Century Fox studios, 2000 was also the same year the studio released the first live-action X-Men movie. Rothman didn't believe in the idea at all, thought it was going to be a failure and he proactively worked to sabotage the entire production. Rothman ate his words though, as "X-Men" in 2000 opened huge and made the studio big money. Rothman continued his excapade to sabotage a franchise that was very profitable for the studio (one of the reasons why X3 was so poor.) until his retirement in 2012. Today, it seems Fox understands what they have and they are allowing Singer and his crew to be challenging.

This week, it was announced that in 2016, the X-Men will go head-to-head with one of their most popular villains, Apocalypse. The tentative date of release is May 27th, 2016, however, this release date has not been confirmed by Singer yet. So keep that in mind as this story progresses.

For those of you unfamiliar with X-Men comics, Apocalypse is not only one of the greatest foes the team of mutants has ever faced, he's one of the most powerful villains in all of Marvel comics. He was one of the very first mutants, he's immortal, he can heal himself like Wolverine, he can absorb energy, change his size, teleport, he can shapeshift into anybody he wants, and did I mention he's basically immortal? All of this leads to one conclusion: whomever they cast to play this character is going to have a lot of fun.

I'll be curious to see if we get any Easter Eggs for this idea in "Days of Future Past" coming to theaters this summer, I'll also be curious to see how this idea fits into "The Wolverine" sequel James Mangold is planning. Overall, I love that Singer and Fox are finally fleshing out X-Men's universe, and picking challenging and engaging story lines to adapt to film. Apocalypse has been involved in many cool stories, I can't wait to see what they do with him.

Posted by Shawn Hoelscher at 1:34 PM