Disney Has Now Acquired The Rights For Indiana Jones 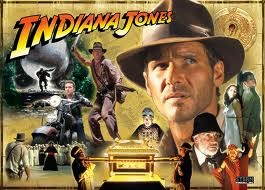 I know I've never mentioned it on this blog, but I love the Indiana Jones movies.

"Raiders of the Lost Ark," "Temple of Doom," and "The Last Crusade" are all big pop extravaganzas. They are funny without being tacky, they are adventurous without being cliche and they are violent without the excess. Not to mention they gave birth to one of the most popular characters in cinematic mythology. If I could claim that any franchise was the definition of the action-adventure movie, look no further than the original Indy trilogy. Sure, there was scary stuff, images that came from way out of left field, but everything always seemed to fit into this world nicely. To this day, I still have very conflicted feelings about "Kingdom of Crystal Skull," but for mostly nostalgic purposes, I have a special place in my heart for that film.

We know a few years ago that Disney purchased LucasFilm, and George Lucas was immensely involved in these four films. This sparked a complicated negotiation process which ended in Disney getting the rights to make more Indiana Jones movies, even though Paramount Pictures will still hold onto the first four films. Paramount will be a "silent partner" in the making of any future projects with Disney. I know its sounds weird and complicated, but that seems to be the trend when Disney buys something these days.

Now that we know Disney has the right to make new Indiana Jones movies, what does that mean for the future? Obviously, Disney didn't just buy Indiana Jones just to possess it. There has to be some kind of idea in play, they have to be formulating some kind of outline that may pan out over the upcoming years. The thing is, we have no idea what that is yet. I highly doubt that we will know anytime soon what the idea is. Disney is pouring all of its focus on "Star Wars: Episode VII" and I understand why. There seems to be tremendous pressure to get this new Star Wars right, and I can understand that.

Something that seems a sure thing though, Harrison Ford has at least one more film in him. The actor has been campaigning for another Indy adventure for awhile now, and whatever the deal was that Disney signed to obtain control of the franchise, part of the deal was for Ford to show up in the new Star Wars films. That's right folks, if the sources have true information, Ford is returning as Han Solo in some capacity. How much? We don't know yet, but I am little giddy to find out. But that is a different conversation entirely.

The thing is, Ford probably has one movie left in him. The guy is getting close to 70, there have been huge gaps in this franchise, and he just can't do it forever. And come on, Disney didn't buy these rights to make one film. So does that mean a reboot is in store sometime in the future? Either that or Disney comes up with another way to continue the franchise. Is it a good idea to make one new film with Ford then completely start over? I really don't know yet, its tricky. Not everyone fell for "Kingdom of Crystal Skull," so whatever Disney comes up with for a fifth Indy adventure, it needs to be unbelievably impressive. Even if the fifth film is a return to form, that doesn't promise that audiences will buy into a reboot sometime later.

Right now, Disney is making some wildly ambitious choices with their new toys. Will that ambition ultimately pay off for them? What do you guys think?

Posted by Shawn Hoelscher at 8:13 PM