Dawn of the Planet of the Apes Trailer! 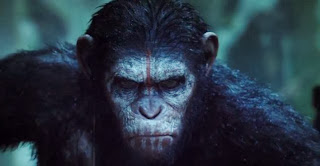 In 2011, I don't think too many people were expecting "Rise of the Planet of the Apes" to be close to great, or good or even mediocre. I sure didn't have a lot of faith in the prequel, and I know for a fact I wasn't particularly alone. But as the early reviews came pouring in that summer, people's opinions took a step backward. I remember being incredibly impressed by the prequel. It just goes to show that no matter what the subject matter, anything is possible in the movies. Anything is possible.

Today, I am wildly excited for the prequel's sequel (ha ha!), entitled "Dawn of the Planet of the Apes" and judging by the first trailer, this newly formed franchise could end up being The Little Franchise That Could.

Gary Oldman as the villain? Awesome!

The return of Andy Serkis? Killer! That last bit at the end where it looks as if the apes are getting ready for war is superb!

It's relentlessly impressive trailer and I hope this movie is just as good as the trailer is!


Posted by Shawn Hoelscher at 8:45 PM