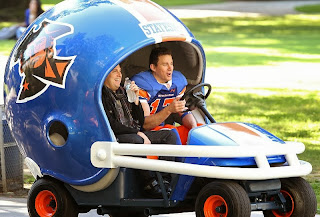 I don't know about all of you, but I got a huge kick out of "21 Jump Street" in 2012. I thought it was some of the best comedic work of Jonah Hill's career, and I find him to be a particularly funny guy in general. It was a movie that officially put Channing Tatum on my radar, because I wasn't such a big fan of his until "21 Jump Street." On all fronts, I felt the first film was funny, and a great ride!

It looks as if the sequel will be the same way, because I was cracking up nearly the entire trailer. Tatum and Hill were once again, very funny in the trailer. I also liked that Nick Offerman will have some good material in the sequel, as well as Ice Cube. I think some of the jokes on college culture will fit nicely into their movie and honestly I can't wait to see it.


Posted by Shawn Hoelscher at 5:16 PM