More heroes will be in "Batman vs. Superman" 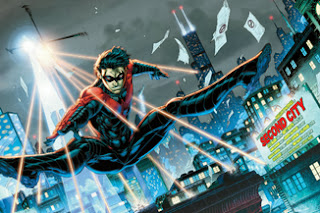 Boy am I behind the curve on this one...

There are some big rumors circling the upcoming "Batman vs. Superman" and it isn't what one would expect.

Hitfix has surfaced rumors that two big characters from the DC Universe might make an appearance in the sequel in 2015. Apparently, Dick Grayson, aka the first Robin, is rumored to appear in the sequel. However, Dick Grayson won't play Robin, he will play Nightwing. There have been several people who have taken the Robin mantle throughout the entire history of Batman. In the comics, Grayson abandoned the Robin persona and took a new one...Nightwing. According to Hitfix's source, Nightwing and Batman "haven't spoken in years," which will be an interesting way to approach the character.

Not only will Nightwing (maybe) join the fray, but Wonder Woman may also make an appearance in the film? A Warner Bros. executive said they are trying to figure out ways to introduce all their beloved DC characters. And having Wonder Woman appear in "Batman vs. Superman" may be a good opportunity for that. Will she get her own solo film in the future? Anything is possible, and the WB is being very vague about it all.

I am curious as hell how this will all pan out. Could this be their way to do what Disney/Marvel has done. Could this be the first formation of a cohesive universe for Warner Bros. and DC? If the rumors end up being facts, this could be incredibly ambitious, will it pay off?