I Feel A Disturbance in The Force 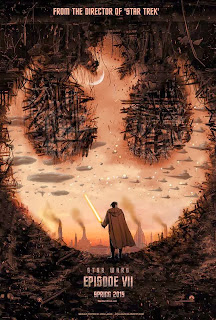 How did you guys feel once it was announced that Disney bought LucasFilm? Better yet, how did you feel once you found out that Disney/LucasFilm was going to make episodes VII,VIII and IX, as well as spin-off films focusing on our favorite Star Wars characters? Its an honest question, for being a lifelong Star Wars fan, I was pretty indifferent about the whole thing. When I learned that George Lucas' role was going to be greatly diminished for the long haul? I got much more indifferent. Say what you want about the prequels, but Lucas is the brain-trust of this entire enterprise. There would be no Star Wars without Lucas, good Star Wars, bad Star Wars, mediocre Star Wars...doesn't matter, it was all his idea. His little idea changed our culture and society forever, so show the man some respect.

When the search went out for a new writer and director to take over the franchise, I just hoped and prayed they got somebody good. When it was announced that J.J. Abrams got the gig, my first thought was relief. Then I thought about it a little longer, and I asked myself "The guy that rebooted Star Trek, really?" Abrams maybe the absolute right man for the job, but there is no doubt that he was a safe choice. The guy had just got done with "Star Trek Into Darkness" for crying out loud. I kind of wished that Disney went with someone more outside the box, but that's just me. No matter what I want, J.J. Abrams is leading the charge on this new direction for the iconic franchise, and I think he'll have all sorts of tricks up his sleeve.

Those tricks however, may not come to fruition, or they maybe watered down versions of those tricks. We have known for awhile now that Star Wars Episode VII is aiming for a 2015 release date. I've talked about it before, and I even posted a timeline for the big, ambitious schedule mapping out the new episodes and the spin-offs. However, in recent weeks, Abrams as well as the creative team behind Episode VII want more time, Abrams just hired somebody to go over the script and make changes if need be. The creative team wanted to push back the release for 2016.

And it was denied by Disney's CEO. Disney really wants this 2015 release, and they will try and get it at whatever cost.

Here is my input: Star Wars fans, whether Disney likes it or not, are going to go into these new episodes with diminished expectations. The prequels left deep cuts in many fans, and I don't know if those scars have healed all the way. I can honestly say that "The Phantom Menace" was kind of a useless movie overall, but has some big moments in it. I enjoyed "Attack of the Clones" quite a bit, when it wasn't pausing for soap opera love stories and I pretty much love "Revenge of the Sith." I am a fair prequel apologist, but many Star Wars fans are not. They hate the prequels. Detest them. Wish they were never made. George Lucas had an opportunity to create magic again, and many people would argue that he blew it. This isn't 1998, its 2013 and people think of Star Wars in a much different light now. I think Abrams has a couple great Star Wars movies in him, and it seems he has a creative team just as motivated as he is. I would say if Abrams wants more time, give the man more time. I don't know about you, but I'd gladly wait however many years it took to see a flawless Star Wars movie again, but I'll be disappointed if in 2015, I get another lazy movie.

The disappointment will be harder to counter if Episodes VII, VIII and IX fail the fans again. Star Wars will become the thing that was cool but then became a self-parody. I don't want that to happen and many true fans of film and Star Wars don't want to see that happen. This is why I feel a disturbance in The Force tonight. That disturbance is coming from Disney. It seems Disney bought Star Wars and saw it as a quick cash grab. But Star Wars isn't a cash grab, Star Wars is one of the rarest examples of magic, a true art form that changed our world forever. If they treat it like magic, these episodes will be magic. If they treat it like its easy money, it will show, and they will get heat for it.

It was really ambitious that Disney chose to tackle Star Wars, especially without Lucas in the helm. But sometimes ambition can pay off in a monumental way. I want great, new Star Wars movies, and I think its possible. Disney just needs to see what they have and let it be. What do you all think?