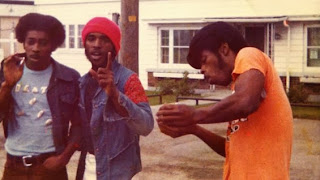 For me, I feel like 2013 will be the year of the documentary for me. I have absolutely no bad feelings about it neither. When a documentary is on top of its game, it can be effective as a feature film. "A Band Called Death" tells an exhilarating story. A story that will have you wallowing in tears, jamming to great tunes and forever smudging a smile on your face.

"A Band Called Death" is about exactly that, a band called Death. Many of you are probably scratching your heads, wondering who this band is and where they fit in musical history. Their origin lies in the mid-1970's, however these guys are still relevant today. Their road to glory was anything but easy, as the band consists of three African-American brothers from Detroit, MI. From a young age, this family trio knew they wanted to become a band, and after a little time, they knew they wanted to be a punk rock band. That's correct, by 1976, punk rock was already born through three brothers from Motor City. It was so unlikely for any African-Americans to do punk rock during that era. African-Americans from Detroit belonged in Motown, except for these guys and these guys did punk rock in style.

What makes the documentary so provocative is that we hear this bands unique story through their mouths. We learn that the band name, Death, had a very specific meaning to these brothers. We learn that nobody wanted to buy a single record from the band due to their name. We learn how they became an underground sensation, and their the trio's children, they released their first album 35 years after being turned down by everyone in the business. The story may sound like a typical tale of a common band from a surface view, but this isn't a common band. Through the unique storytelling of the brother's themselves, they make their story stick. Not to mention the commentary from other rockstars, such as Alice Cooper and Detroit's own Kid Rock. Another way the film works is that the band Death actually delivers the goods. Their songs play throughout the entire film, and it is truly great music. I will buy a Death record eventually, I am sure, and that is possibly the best compliment I can give this movie.

The genius of this documentary is that it took the typical underdog story and made it relevant. In a world of reboots and rehashes, that isn't an easy goal. Due to the band members themselves, the clever archive footage and the stylish editing, "A Band Called Death" ends up being better than it had to be. I would call upon all fans of rock music in general to check this out, and track down Death as fast as you can!


Posted by Shawn Hoelscher at 9:46 PM