Overlooked Film of the Week-#21 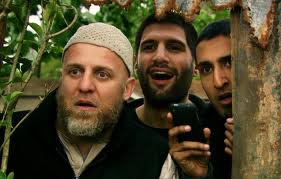 "Four Lions" tells the story of a group of British Islamist who want to become radical terrorists. They have a plot to bomb a race in the heart of Britain that goes rather wary. The whole movie is a black comedy detailing their dimwitted attempts at terrorism planning.

Read that synopsis again, it should be a story that shouldn't work, but somehow it does. A movie about terrorism against Westerners shouldn't be something the typical American should like. But they call black comedy black comedy for a reason. It is meant to be offensive. It is meant to be controversial. This is not the typical slapstick, nor is it really the typical Woody Allen-esque offbeat comedy. No matter what, this is a movie that shall surely make you laugh.

Think of "Four Lions" as a modern movie-length version of the "Springtime for Hitler" dance number from "The Producers." Did you see "The Producers?" That dance number made Hilter look like a ridiculous baffoon, but "The Producers" was slapstick comedy. "Four Lions" paints its radical Muslims as ridiculous baffoons, but the laughs are much edgier than you would expect, its much darker comedy. Out of context, somebody blowing themselves up isn't funny, but if you actually sit down and watch the movie, you learn there is a specific reason to why the person blowing themselves up is funny. They are hard earned laughs, but earned nonetheless.

"Four Lions" works because the young, unknown cast relishes everything they do. I have never heard of Riz Ahmed, Kayvan Novak, Nigel Lindsay, Adeel Akhtar, and Arsher Ali. I can't tell you anything about them, all I can tell you is that they are great in this. I can tell that each of these wonderful actors really put their whole selves into this movie and I think they had a ball making it. When its hard for me to really nail down who my favorite character was, that is always an indication that the movie is rich with characters. Add a very funny script and you've got a good time.

What also makes "Four Lions" work is that it isn't overly-political. I wouldn't really call this movie propaganda in anyway. Sure, radical Islam gets put through the wringer, but is that really a bad thing? The movie is more about putting these idiots in silly situations, while most political is at the door, and what is there is pretty scarce. I think that works for the movie rather than against it.

If you like your comedies jetblack, I'd give "Four Lions" a shot. I think you'll be glad you did.

Oh, and look for a cameo by Benedict Cumberbatch as a hostage negotiator. The End.

Posted by Shawn Hoelscher at 6:59 PM