First Trailer for the rebooted "RoboCop" is interesting to say the least... 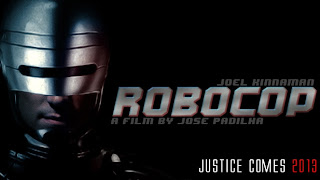 Before I begin, let me make something clear, the original "RoboCop" from 1987 is a classic of the science fiction genre.

I think the 1980's film works as an action movie, it works as a science fiction film and it works has a special effects extravaganza. I never really understood the want or need for the film to be rebooted. Yes, I can say the same for half the remakes and reboots being crunched out every year. Sure, "Total Recall" was trash, but the original film was an ode to Schwarzenegger instead of being faithful to its source material. With "RoboCop," there is nothing wrong with the original, nothing that needs changing or updating. This is just another example of Hollywood cashing in on a brand.

The first trailer didn't do that much for me. There was some cool stuff in it, and plenty of iconic actors. But will this movie change the original? Will it outdo the original? Will this entire project be anything significant to cinematic history? I have my doubts and as far as this one doing much for me and the general public at large.

I love the idea of Samuel L. Jackson, Michael Keaton, Gary Oldman and Jackie Earle Haley sharing screen-time together, but why get together for this?

The big question for me is where will Joel Kinnaman go from here?

Check out the trailer below: