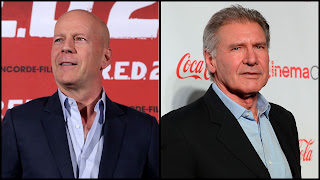 So a big bit of news is circulating today regarding The Expendables 3.

Stallone is always fun to listen to, especially in recent years as he has kept his twitter up to date on all things Expendables related. In the years before Expendables 2, I remember he said that he talked to Jean Claude Van Damme, Chuck Norris, Mr.T, Hulk Hogan, Carl Weathers, The Rock, Vin Diesel, Lorenzo Lamas, Jeff Speakman...even Charlie Sheen and Ryan Seacrest were in the mix for the second film, yes its true. I don't know how how those last two can qualify for Expendables but Stallone said that Seacrest in particular could stand ground with the best of them.

This year, once again, rumors are in overdrive. Stallone has confirmed that Statham, Li, Lundgren, Couture, Crews and Rourke are returning. (Nice to see Mickey Rourke making a comeback to this series!) We also know that Stallone has been rewriting the script to make way for Jackie Chan, Nicolas Cage, Milla Jovovich, Wesley Snipes and Mel Gibson. There has even been serious talk of Steven Seagal signing up. Today though, Stallone confirmed some pretty big things on his twitter today.

Harrison Ford has joined the cast

Bruce Willis is out of the movie.

No matter how you look at it, "Expendables 3" could become another big hit in the franchise, and I cannot wait to see it.