X-Men Comic-Con Panel! I wish I was there...

A Closer Look at "X-Men: Days of Future Past"

Everything I have read this weekend just tells me that I need to get my ass to San Diego one summer for a Comic-Con celebration. It has got to be the coolest thing in the world for a guy like me. It may shock you that I haven't attended yet. Trust me it shocks me too.

It seemed like this was definitely the year to go, too. Not only have I been swooning over the description of  "Thor: The Dark World" and "Captain America: The Winter Soldier" but seeing everything revolving around the X-Men has been eating at me in a big way.

Simply put, the X-Men drew me to Marvel. It wasn't Spiderman, it wasn't The Avengers, it wasn't The Fantastic Four or anybody else. It was a group of people who were hated and feared by the rest of the world, a group of people that were born with extraordinary power that they did not want, but they chose to prove that they could be normal and they wanted to change the world for the better. That is such a great message, and to tell it in great detail in the frames of a comic book, its transcendent.

Overall, I have been really happy with the X-Men movies. X1 and X2 are great, pulp comic movies, they work every single time you watch them. I think X3 isn't nearly has bad as people like to say, I think "Daredevil," "Hulk," "Fantastic Four films," "Elektra," "Ghost Rider," and "Spiderman 3" are all far worse. The third chapter just didn't fire off the same cylinders that the first two did. The really only bad entry in the series was "X-Men Origins: Wolverine" it ruined the character, it looked cheap, it was poorly acted, the story was dumb and at moments made zero sense, it didn't stick to continuity of the franchise in any way, but most of all, it ruined the origin of the most beloved superhero in my world. That movie made me weep for what could have been, and I hope "The Wolverine" changes that.

But nothing can compare to the excitement I have for "X-Men: Days of Future Past," not only am I geeking out about seeing the new and old stars of this entire franchise in one movie, but they are getting together to tell one of the best Marvel stories ever told. And from the description footage I read tonight, it looks like we are in for an unforgettable motion picture next year.

I invite all of you to read the description below from good ol' Drew McWeeny of Hitfix.com, my go-to site for all things Comic-Con this year, and check out the pictures from the panel presentation. The nostalgia is definitely in overdrive, and I cannot, cannot wait to feast my eyes on some kind of trailer in the near future (pun totally and utterly intended.)

There's a lot going on in what we saw. What's apparent is that Wolverine is approached by Professor Xavier and Magneto, played once again by Patrick Stewart and Ian McKellen, and Xavier is well aware that at some point, he died. He remembers what happened to him in "The Last Stand," but somehow he's back, and he tells Logan that he needs his help if they're going to prevent a full-scale war that will wipe most of the world's mutant population out completely. We get a glimpse of Bishop (Omar Sy), and we see a much older Rogue (Anna Paquin) as well as Storm (Halle Berry). They figure out a way to send Wolverine back in time so that his consciousness will appear in his younger body, and Xavier needs Logan to convince the younger Xavier (James McAvoy) and the younger Erik (Michael Fassbender) to set their differences aside for the good of everyone.
"What's the last thing you remember?" Stewart asks as we a see a close-up of his eye opening. A much-older Wolverine (an interesting image after you see how little he's aged from WWII to today in "The Wolverine") replies, "I had a little glimpse into the past." When we see the place where they are, it's one of the most surreal sets I've ever seen in an "X-Men" movie. I want to see the future they have ended up in, because I guarantee we barely saw any of it in this footage. Everyone's wearing armor of some sort, with both Stewart and McKellen in very similar outfits."You're going to have to do for me what I once did for you," Stewart says.McKellen steps up next to him. "You need me as well. Side by side to end this war before it ever begins."It seems like the McKellen version of Magneto has been humbled based on what we see here, like he's finally seen the price of the path that he advocated for in all of the films. He knows what it will cost everyone, human and mutant alike, and it's not worth it. Logan asks what he's supposed to do and they tell him to find Xavier and convince him first. We see a shot of McAvoy heading into Cerebro, and it's obvious it's far more refined than it was in "First Class." We also see a shot of Fassbender, floating above the front steps of a building, using his powers to rip aside some sort of gate. He warns Wolverine that the younger Erik is on a darker path than Charles, and we see Mystique, one tear rolling down her blue cheek.Xavier is pleading with Logan by this point. "Lead me. Guide me. Be patient with me."With his best Eastwood sneer, Logan says, "Patience isn't my strong suit." And then  a quick cut and ZAP. He's back in time.Here's where things get crazy. We see a door in the floor of the Oval Office open. I'm pretty sure we saw a shot of Nixon. We got a great shot of Peter Dinklage as Bolivar Task, complete with a '70s porn-stache that has to be witnessed to be fully appreciated. There's a crazy shot of a shirtless younger Wolverine positively shredded from bullet holes. We see the Beast freaking out at one point. We see someone being held underwater, unable to breathe.And then at the very end, we see McAvoy, tears in his eyes, touching Logan's face, and in voice-over, McAvoy says, "I don't want your suffering. I don't want your future."The final shot gave me chills. It's McAvoy and Stewart in frame together, looking at one another, as Stewart says, "Please. We need you to hope again."
Read more at http://www.hitfix.com/motion-captured/foxs-mammoth-x-men-panel-unites-old-and-new-casts-for-a-great-hall-h-moment#KMy2wQjQofoUJE62.99 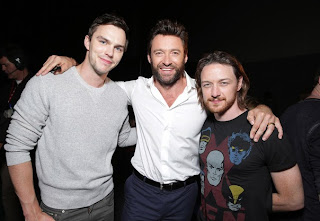 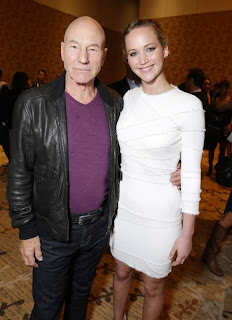 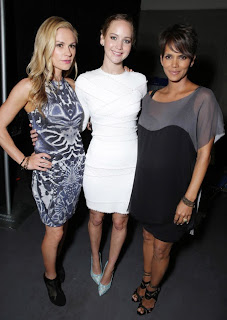 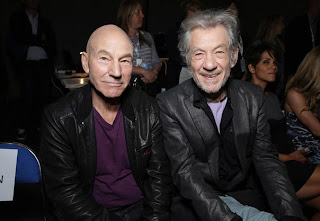 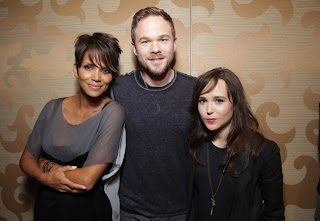 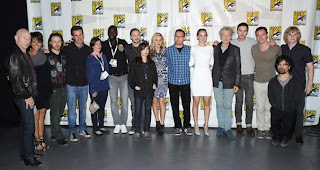 Posted by Shawn Hoelscher at 8:18 PM