Will Spiderman and his Amazing Friends show up by the Fourth Amazing Spiderman film? 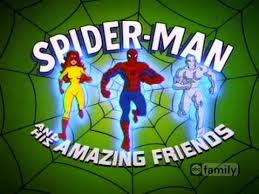 Its been known for awhile now that Marc Webb, director of "The Amazing Spiderman" is planning not two but THREE sequels to the 2012 superhero reboot, making it a four movie event. Tonight, Webb's plans for the fourth film in his "Amazing Spiderman" franchise is going to feature other superheroes.

"I think this was conceived of as a trilogy so there was a defined architecture to the story we were telling and we had sort of a rough outline of what was going to happen," Webb began. "I think [for] the fourth movie, what we've discovered is there are so many ancillary characters, that have enormous, cinematic potential that there may be other ways to exploit those characters, in a way that is exciting and fun and worthwhile. It might not just be a Spider-Man movie." says Webb. "You know, what was fun about the comics is that there's an entire sort of encyclopedia of characters and stories and histories and nuances and idiosyncrasies and off-shoots, I think that that is something that seems to be really successful and has a lot of potential so it's sort of, as yet, undefined, but intentionally so."

So is he saying that we may see the Black Cat? Will Harry Osborn become the anti-hero version of Venom? Will we see Spiderman's Amazing Friends show up by the fourth film? It may sound cool on paper, but I do have some reservations.

First of all, Marc Webb needs to make a good "Amazing Spiderman 2" and a good "Amazing Spiderman 3" before we even come close to having the "Spiderman 4" conversation. I understand "Amazing Spiderman" made a decent amount of money, but that doesn't mean anything story wise. It was a mixed bag of reactions from critics and fans alike. I have said it before, and I'll say it again: Sam Raimi may not have followed the comics as closely as Webb has, but the emotional journey of his characters is what made his first two Spiderman movies worthwhile. I never thought Webb brought lots of emotionalism to the character, and that was far from the only thing Webb decided to leave out. If Webb makes a poor second and third entry in his series, this fourth film idea will evaporate quickly. Just because we know that "Amazing Spiderman 4" is set for release in May 2018, doesn't mean that it can't get cancelled between now and then.

Second of all, I don't really know how excited I am for "Amazing Spiderman 2," in particular the casting of Jamie Foxx as Electro and Paul Giamatti as The Rhino scares me. I know Foxx and Giamatti are both high profile actors, but that's the problem. They are so high profile that I feel like it looks weird that they are playing these characters. Myself, as well as many other comic movie fans still have a bad taste in our mouths from "Batman Forever" and "Batman & Robin." A-Listers don't automatically mean box officer numbers nor do they mean their movies are built to last. I like Foxx and Giamatti a lot, but are they right for Electro and Rhino?

Third of all, Sony has had ideas for not only a superhero ensemble but a supervillain ensemble in the form of Spiderman's Sinister Six, an idea I like a lot more than this. But the truth is, are big superhero ensembles already becoming cliche?  Did "The Avengers" create a slave trend? Are studios going to create a new norm where every year we can expect superhero team movies? Look at what DC studios has been trying to do since Avengers. Look at what Fox is doing with their X-Men stories. After many years of looking over general public reaction, the idea of constant superhero team-up films is going to get stale fast, and once that happens people are going to get less giddy by the time MCU Phase Three comes to close. And I for one don't want that day to come so soon. But alas, studios look at a team-up concept with dollar signs attached to it, and so it goes.


I hope what Webb is cooking up for us surprises me in a way I have never been surprised before. I want to love Spiderman, should I keep hope alive?


Posted by Shawn Hoelscher at 7:32 PM