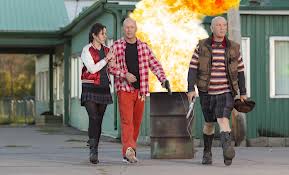 I got a huge kick out of "Red," which originally came out in 2010. It was a ton of fun and I still plan to read the comic books which these movies are based upon, because I am sure they work just as well as these films do. As much as I liked the first film, I am always wary of sequels. I never mean to be, but it has always been a cardinal rule in the back of my mind. I have been burned too many times in the past to think otherwise. Sometimes, I get a surprise from a sequel though. "Red 2" is definitely one of those surprises.

I liked how the film opened, when we reconnect with Frank Moses (Bruce Willis) he is still with Sarah Ross (Mary Louise-Parker), and Moses is trying proactively to impress her. Little does he know that she feels their relationship is getting stale, and she wants something very exciting and innovative to happen to recharge their connection. Boy, oh boy is she in for something exciting...

Moses is warned by his old friend Marvin Boggs (John Malkovich) that someone is trying to kill them and that they need to get somewhere safe, Moses is hesitant at first, until Boggs' car blows up. Then Moses, Sarah and Boggs are thrown into a whirlwind as it seems every government in the free world has hired someone to kill them. A mission they took in 1979 catches up with them, and they need to find a WMD that is ready to level London.

Not only do we reconnect with Moses, Boggs and Sarah, but also Victoria (Helen Mirren) who has been hired by MI6 to kill the trio. We are also reintroduced to Ivan (Brian Cox) who has a much smaller part in this sequel, but boy does he make his little time count. It's a very dense cast; including Anthony Hopkins as Mr. Bailey who created the mysterious WMD, Catherine Zeta-Jones as a Russian agent who once had a fling with Moses, Neal McDonough as Jack Horton a CIA agent on Moses' trail, Lee Byung-hun as Han who is described as the best contract killer in the world, and David Thewlis as The Frog, a mysterious man who sells information and also has a taste for wine. With such a big cast, I was pleasantly surprised how well written each character was. Each character had the opportunity to shine, never feeling rushed and never dragged out.  Each actor does an outstanding job of bringing this cast together, so good to the point that I can't tell you which character I liked the most.

With a cast this big as well as the many twists and turns the story features, it could be easy for people to get lost in the shuffle. The twists begin to come at you so repetitively that I felt like this sequel was aiming too high. I thought it might end up reeking of desperation. But the writing, directing and acting is so careful that it works. By the end of the film I was having so much fun, I didn't care how jumbled certain parts of the movie were. I was also impressed that this movie didn't follow standard action cliche. For example, When our trio begins to work with Katja (Catherine Zeta-Jones' character), its pretty clear her and Sarah despise each other and are competitive for Moses' affections. With that said, you would probably think that there is a sub-plot where Sarah catches Katja kissing Moses. Then you would probably think that Sarah would leave in sadness and regret, while Moses chases after her. And you would probably think that it take a huge situation at the end of the movie for Moses and Sarah to rekindle their relationship...BUT...that DIDN'T happen and I was happy.

"Red 2" definitely feels like something original. I can't tell you how refreshing that feeling is.

Like I said above, there are some jumbled scenes. "Red 2" is a movie you are going to want to pay attention to, not exactly a movie to have on while doing something around the house. I also felt there were a couple character narratives that happened strictly for the convenience of the plot. For example, Byung-hun character is bloodthirsty for Moses practically from the very beginning of the movie, they paint his hatred for Moses in very broad strokes. However, when Moses asks for his help, it only takes about five seconds for Han to decide to become a good guy. There are couple things about these characters that felt rushed. But I felt all of these minor flaws where tiny nitpicks. The film is filled with so much fighting, guns, bullets, cars, explosions, one-liners, laughs and jets that none of the flaws seemed to matter.

Late July and throughout August annually is the time of year when the summer movie season slows down. During this slow period, we tend to get lots and lots of crap cramping up the movie theaters. However, in a slow part of the season, its great that a movie comes out of nowhere, possessing the ability to surprise. "Red 2" is that movie. Fans of the first film should get in line right now. If you are new to the series, that's okay too. You can see this without seeing the first film and be just fine. I hope you all enjoy this like I did.


Posted by Shawn Hoelscher at 9:09 PM