Attending the Comic-Con festival in San Diego is on my bucket list.

I understand that Comic-Con festivals take place all over the world but there is nothing like the festival in San Diego. Especially with the famous Hall H surprises.

This year, fans got to witness all sorts of footage from "Thor 2," "Captain America 2" and "Guardians of the Galaxy." And it sounds like all of those movies are going to be great. A description of each film's Comic-Con footage was explained in detail at Hitfix.com!

I say this much. After seeing "Iron Man 3" in May and reading the descriptions of footage for "Thor 2" and "Captain America 2," one thing is for certain: Phase Two is about piling the angst on our characters. It looks like our favorite heroes will be put through the ringer as the second phase of this big Marvel project begins to come to a close. And it seems "Avengers: Age of Ultron" could be something big and crazy!

Check out the descriptions below and stop by Hitfix.com to check out more Comic-Con coverage!

THOR: THE DARK WORLD
we find the Warriors Three caught up in a battle in some distant realm. We see Sif and the others, and it's obvious this is a fairly even fight. Suddenly, amidst a blast of energy, Thor appears and Mjolnir flies out, taking down several foes before returning to his hand.Sif seems frustrated to see him. "We have this under control.""Oh?" replies Thor. "Is that why everything's on fire?" Right away, Hemsworth seems more relaxed and at home in the role. The crowd starts to fall silent, and then move out of the way as an enormous stone giant comes walking up to look down at Thor, speaking to him in some alien tongue."I accept your surrender," Thor says. As the thing bellows at him again, Thor unleashes Mjolnir, throwing it up with such force that it explodes the giant's head into a million tiny rocks.The rest of what they showed was dense with images. Obviously something takes up residence in New York, some giant land-mass, and Thor ends up bringing Jane Foster (Natalie Portman) back to Asgard with him for her own safety. I laughed when we see Darcy (Kat Dennings) standing in the smoking rune where Jane and Thor vanished, looking up at the sky with a quiet "Holy shit."The entire thing looked big and beautiful, with a new emphasis on Idris Elba as Heimdall, and it's obvious Loki plays a fairly major role here when Thor springs him so that he can help them. He's Loki, though, so you know that's not going to last, and the final shot in the preview had Loki standing over a bloodied Thor. Thor puts out his hand to call Mjolnir to him, and just before it gets there, Loki swings a blade and cuts Thor's hand completely off.
Read more at http://www.hitfix.com/motion-captured/sequels-to-thor-and-captain-america-show-up-and-make-big-splash-at-comic-con#p1OB6r7mjJeSwlwK.99

CAPTAIN AMERICA: THE WINTER SOLDIER
It starts with what may be the single tensest elevator ride in the world. Captain America gets on, and a few other guys file in after him, including Brock Lumlow, played by Frank Grillo. While they're friendly to him and act relaxed, Captain America notices one of the guys has his hand on his gun, ready for something. At each floor, more people step in, until it's something like eleven guys around Cap. He sighs, knowing full well what's about to happen, and says, "Before we start this… anyone want to get off?"
And then they fight. The guys try to put these magnetic handcuffs on Cap to hold his arms against the wall, but Cap's not having any of that. He ends up beating down every single person in the elevator except for Lumlow, who keeps hitting him with a taser. "Sorry about this, Cap," Lumlow says. "It's nothing personal."Once he's finally had enough, Captain America overpowers Lumlow and sends him to the floor with everyone else, unconscious. "Well, it feels personal," Cap says as he steps out.The rest of the footage is very big and very dark. Robert Redford shows up as Alexander Pierce, a high-ranking political figure, and we definitely got to see the Falcon in flight. We saw a fair sampling of Natasha Romanoff (Johansson) in action as well. Finally, after a brutal scene of the Helicarrier being brought down in shallow water, smoking and disabled, we see a shot of Cap's shield. Someone walks over to pick it up, and we get our first look at The Winter Soldier in full make-up. He looks creepy. I'm excited to see what they do with the character in the film and how he fits into the larger universe they're building.
Read more at http://www.hitfix.com/motion-captured/sequels-to-thor-and-captain-america-show-up-and-make-big-splash-at-comic-con#Uh8XIPhSpI868yj0.99

GUARDIANS OF THE GALAXY
The footage opens with Star Lord (Pratt) on an alien planet. He finds some sort of ancient temple and enters it, looking for something specific. He finds a strange spherical thing on a stand and picks it up. As it comes to life, blue light pouring from it, a group of armed men enter the cave behind Star Lord. Korath (Hounsou) steps forward, gun up, and orders Star Lord to drop it. Pratt's more than happy to do so, not wanting to get shot."Who are you?" Korath asks.I love how Pratt oversells it when he answers, "Star Lord.""Who?"The whole next scene shows Star Lord being processed as part of a line-up of some sort, and it's an excuse to introduce all of the Guardians in costume and in make-up and right away, it's just visually awesome. So much fun to look at. Such cool designs. It's John C. Reilly reading off the files on each of them, with Peter Serafinowicz playing off of him, and they've got a great rhythm going back and forth.So we see Gamora, and it's a wild look for Saldana. Dave Bautista's Drax is mammoth and savage-looking. Groot, who appears to be completely CGI, is so tall that he has to lean in to look out at Rhomann Dey (Reilly). Reilly calls him "house-plant-slash-muscle," and I'm dying to see what a fight with Groot looks like.And then the moment that I think is going to be a lightning bolt for pop culture. The introduction of Rocket Raccoon. Laugh if you want to, but that little sonofabitch is going to be the biggest thing next summer. They have to get the voice right, and I've heard all sorts of wild stories about the search for that voice so far. I'm shocked they didn't announce it today, but I guess that gives me a reason to go to D23 in a couple of weeks. They mention that his arrest record includes over 90 counts of vehicle theft. He just sits there and bristles at them, then sneezes, and it's effortless animation. He just looks like a pissed off little sentient raccoon.The last one they name is Chris Pratt, and as they talk about Star Lord, he acts like he's turning an invisible crank, gradually extending his middle finger to them. When he finishes, he looks surprised by it and apologizes to them. "Oh, sorry, I don't really know how this machine works."Reilly shakes his head, unimpressed. "They call themselves the Guardians Of The Galaxy."Serafinowicz shakes his head, equally underwhelmed. "What a bunch of a-holes."The rest of the reel was quick imagery, all cut to the song "Hooked On A Feeling." If you don't know it, it's one gloriously strange choice. We see vehicles and planetscapes and aliens galore, and there was one shot of Rocket Raccoon mid-attack that is so preposterously cool, filled with such attitude, that it is unfair. You can't show me a taste of something that crazy and not follow up with the main course. I want to see this movie more than either of the sequels at today's Marvel panel.Sure… they might have shown us every cool thing today. The rest of the movie might not work. Anything can happen. But feeling this sort of excitement and optimism about something in production is why I do this in the first place. I love it when I see something that hooks me and it feels like something really wonderful and weird is going on. I hope this gamble turns out to be a good one for Marvel in the long run, because it felt like a home run today.
Read more at http://www.hitfix.com/motion-captured/marvels-strangest-film-so-far-guardians-of-the-galaxy-makes-a-strong-hall-h-debut#J7uwSL3sOE7rLWKF.99 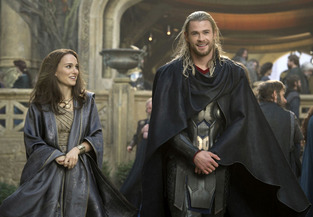