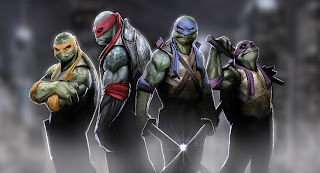 For a few months now, we have known that a Michael Bay produced "Teenage Mutant Ninja Turtles" reboot is currently underway. Paramount Pictures will distribute the film and it is set for June 6th 2014 release date. A whirlwind of controversy has met with the project. But I haven't had the chance to sit down and talk about my feelings about this reboot.

I feel the original trilogy of films are great fun, I own all three on blu-ray. I would also like to get TMNT which came out back in 2007 eventually, because that was great fun too. I feel like for the most part, the Turtles onscreen has been successful so far. Everything pretty much feeling true to the source material, while also making it a separate creation. So when I heard Hollywood would be bringing the Turtles back for a reboot, I was kind of curious to see what would happen with it.

I am going to break this article down into parts so I can really get down into the nitty-gritty of why I feel this project will either sink or swim. There are plenty of question marks about production and casting in my head right now, and I want to get my thoughts on paper. (so to speak) Plus, I would love as much feedback on this as possible.

Inter-dimensional turtles?
One of the first things that producer Michael Bay announced about this reboot was the origin change of the turtles. He stated that the turtles will be an alien race from another dimension. This put fan resentment into overdrive. People panned the idea before a trailer or script was even announced. But Paramount issued a statement sometime later telling people to trust Bay and his team of writers. The studio also planned to include all the turtle elements the fans have grown up loving. The original title was going to be "Ninja Turtles" instead of "Teenage Mutant Ninja Turtles."

Honestly, if Paramount said they would include all elements we have grown up loving, then why leave out the "teenage" and "mutant?" That is apart of the identity of these pop culture icons. I would not say I agree one hundred percent, but Hollywood is still living in a time where they want clever updates of popular characters. I guess I want to ask the peanut gallery this: What is more believable? Baby turtles who walked into radiation or alien turtles from another dimension? I told myself in the beginning that I could live with slight changes. Which leads to...

Early 2012 script leak
An early draft of the film was leaked online back in early 2012. The spec script was titled "The Blue Door" and was written by Josh Applebaum and Andre Nemec. The script featured the turtles from another dimension, as well as Master Splinter. Shredder was changed to "Colonel Schrader," a governmental agent who is secretly an alien who can push blades out of his body. "The Foot Clan" was changed to "The Foot" and they were a black ops team who worked with Schrader. Casey Jones and April O'Neill would be teenagers, who were in a rocky relationship because of April getting an internship at CBS. Raphael was going to be the comic relief instead of Michelangelo, as he would fall in love with a female turtle back on his dimension.

Okay, so after reading that I feel the changes are a bit much. As I stated above, I can take slight changes. But to create something almost entirely different and call it something popular is wrong. Either there need to be massive changes to the script before shooting or the studio really needs to cast great actors who can really sell the idea to the point that general audience and hardcore Turtle fans alike will accept all the silliness. But Paramount as already made a misstep with... 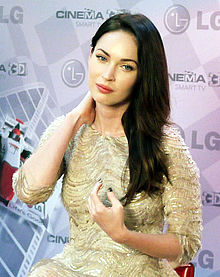 This past February, Megan Fox was cast as April O'Neill. Apparently the feud with Michael Bay which got her fired from Transformers 3 got settled. This is without a doubt the biggest misfire in a major popular adaptation I can think of. She is totally wrong for April O'Neill and is totally devoid of talent. Other than the Turtles and Splinter, April is the one of the most important characters in the Turtles mythology. And they gave the character to a no-talent actress who has barely done anything in past few years.

A month after it was announced Fox was going to be April, four unknowns were cast as the Turtles. With that choice, I feel like Bay and Paramount earned some merit back. I feel like putting unknown faces to these turtles could be the best thing for the reboot. The audience won't have the pressure of expecting big things from four A-list actors. Plus, this could be a huge career moves for these new guys. Their names are Alan Richton, Pete Ploszek, Jeremy Howard and Noel Fisher. I can't tell you a thing about their careers but that is really exciting. Remember, Hugh Jackman made his career out of playing Wolverine in the "X-Men" franchise. Someone else's career could bud to superstar after this too. 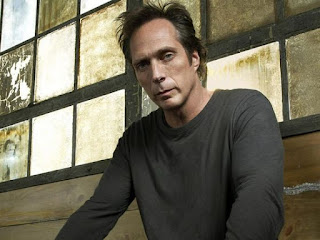 Today, a big piece of casting news was dropped on the internet. Veteran actor William Fichtner was cast in an unspecified role. However Paramount says he is "playing a character very iconic to the TMNT mythology." Rumors on the internet have been a frenzy all day. If you are wondering about my two cents. I think maybe he was cast for Shredder. Some people on the internet today discussed Fichtner being Casey Jones, but that just doesn't ring true to me. Megan Fox is 26 and William Fichtner is 56, that is quite the age gap. Plus, Fichtner has a villainous side that is very hard to resist. I am not saying that Fichtner couldn't be Casey Jones. However, if a creeper Casey Jones spends the movie trying to win the love of young April O'Neill, then that will be a deal-breaker for me. I have a feeling I won't be the only one who thinks that.

Danny Woodburn (Mirror, Mirror) was cast as Splinter and Will Arnett (Blades of Glory) was cast as Vernon Fenwick. That is all the casting details I have right now.

The Verdict
I want to love "TMNT." I feel epic nostalgia when I watch the original movies. I have very fond memories of playing the video games and watching the cartoon with my brother on Saturday mornings as a kid. At my current job, on show-n-tell day, I always get at least one kid who brings a Teenage Mutant Ninja Turtles toy. It makes me smile, these characters will live forever. I want to discuss these characters with my own children one day. But major changes to this script have to be made in order for this reboot to flourish.

Maybe I am wrong. Maybe audiences want inter-dimensional aliens. Maybe you want a love story between two alien turtles. Perhaps you really do like Megan Fox as April O'Neill. But I have a big feeling of doubt towards that. I hope Bay, director Jonathon Liebesman and Paramount can throw something together that we aren't expecting. If they stick the landing to this film, it will be a great glory. Tonight, I will cross my fingers and hope for the best for this. What are your thoughts? I would love others to chime in on everything revolving this reboot.

"Teenage Mutant Ninja Turtles" will be released on June 6th 2014.

Here are some set photos. 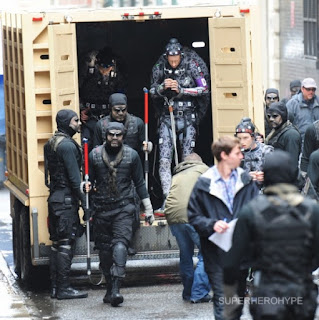 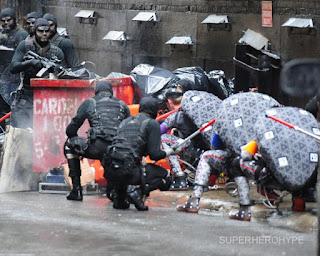 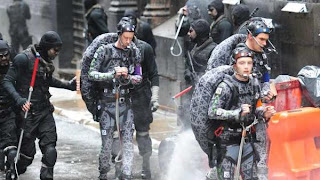 Posted by Shawn Hoelscher at 6:10 PM