Al Pacino out of Despicable Me 2...Benjamin Bratt steps in.
Apparently, Al Pacino has suddenly exited production of Despicable Me 2, which is too bad because I like Pacino a lot. I figured it would be a big deal since the film opens July 3rd. However, a replacement has already been found in Benjamin Bratt (who you will remember from "Miss Congeniality). Apparently Pacino had "creative differences" with Universal. While I love Pacino, I also love Bratt and I still can't wait to see this sequel! 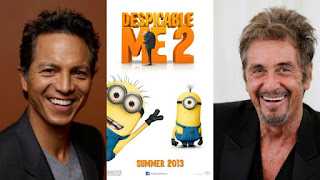 Iron Man 3 creates a record breaking opening weekend.
Over the weekend, "Iron Man 3" made bank, $175.3 million to be exact. This debut is the second highest grossing opening weekend of all time, right behind The Avengers. International sales include $63.5 million in China, $42.6 million in South Korea, $38.3 million in Great Britain and $35.8 million in Mexico. Way to go Iron Man! But word has been so-so from most fans and some critics. Will this threequel hit the billion mark worldwide like "The Avengers" did? We shall wait and see.

The Crow remake finally gets a lead. And its... 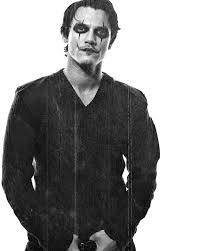 The remake of 1994's "The Crow" has been on the table for quite sometime now. Bradley Cooper was attached to play the lead for while. He was attached so long that concept art with him in Crow make-up leaked on the internet for awhile. Then for unknown reasons, he left production of the film. Then we heard a few weeks back that Tom Hiddleston was attached for the lead. Hiddleston is famous for playing Loki in both "Thor" and "The Avengers," but I don't know if he ever was seriously attached or not.

Everything is shattered today though as actor Luke Evans is confirmed for the part in the remake. Evans is a Welsh actor you may recognize as playing Apollo in 2010's "Clash of the Titans" as well as Zeus in 2011's
"The Immortals." If you haven't heard of him, you most likely will as the actor has a lot on his plate in the next few years. Evans will play the main villain in the upcoming "Fast and Furious 6" and he will also play Bard the Bowman in the next two Hobbit movies.

"The Crow" in 1994 was met with quite a bit of controversy as Brandon Lee, the lead, died on set. I never cared for the film and after Lee's death I don't feel the film should have ever been released. I really enjoy Luke Evans. So, to be honest, I don't know what to think of this project. I guess I will wait for a trailer to make my decision.

J.J. Abrams talks Star Wars!
Okay, I am just going to come right out and say it. I love Star Wars. I love the original trilogy. I am probably the only person on the planet that loves the prequels. I love the Clone Wars cartoon (NOTE: Not the silly, made for kids cartoon that is currently on Cartoon Network, but the more grounded, badass cartoon which came before and only lasted two seasons.) I love researching the universe. I love the video games. Everything Star Wars related I pretty much dig. But, like many I was very reserved to hear that Disney was thinking about bring Star Wars back. I felt it would be best to leave the movies alone. Especially after the fanboy tirade against the prequels, I also thought it would be awfully unwise.

Once I learned that Disney hired J.J. Abrams to direct Star Wars: Episode VII, I was a little bit more excited for it. J.J. Abrams is the man behind the Star Trek movies now and I have also enjoyed "Lost" and "Cloverfield." However, I did not think fully grasp that Star Wars was in the right hands until I watched this video. It features J.J. Abrams and Simon Pegg discussing their Star Wars love.

When I hear him talk about it, Abrams really sounds like he is a true fan too. I feel like we might get a good movie out of him. I will be forever curious to see what Episode VII will look like and I hope it's a good one.

That's it for tonight everyone. Have a good evening.

Posted by Shawn Hoelscher at 7:15 PM