Here are some movie stories for you.

X-MEN DAYS OF FUTURE PAST SET PHOTO
If you remember from last month, I created a cast list of people and characters circling the new "X-Men" movie coming in 2014. Posted today was a set photo of James McAvoy in action as Professor Xavier. He is looking the opposite of bald. Check it out. 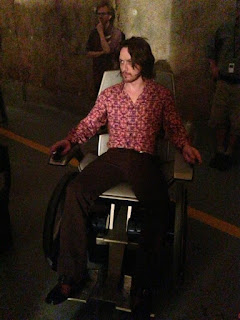 I am still looking very much forward to this movie! It comes Summer 2014!

300:Rise of an Empire pushed back 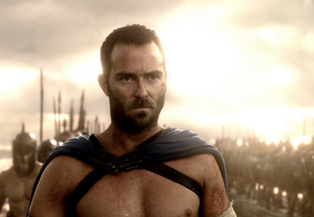 Today, Warner Brothers studios said that "300: Rise of an Empire" got pushed from August 2nd 2013 to March 7th 2014. Which will put it in the same release schedule has "300" in 2007. Warner Brothers said today that the change was made in order to "keep the tradition" of the first 300 film. Warner Brothers also said they plan to start the spring film season in 2014 with a bang, and the sequel will feature the "epic feel" of the first film.

I am still waiting for a trailer for this film to see if I am excited or not.

A Look at some new Trailers

Gravity
Now THIS is a teaser trailer. It is very discreet, one small scene and its done. When you have two A-listers like George Clooney and Sandra Bullock, it looks even better. The film centers on two astronauts performing a space walk and their ship gets hit by debris. And one astronaut gets separated from the ship. The film will be directed by Alfonso Cuaron who directed "Children of Men" and "Harry Potter and the Prisoner of Azkaban" Check out the cool teaser

Captain Phillips
Looks like we have a great October heading our way. Tom Hanks will lead "Captain Phillips," a biopic about the real Captain Richard Phillips who was captured by Somali Pirates in 2009. The film will be directed by Paul Greengrass, who directed "The Bourne Supremacy and The Bourne Ultimatum"
"Captain Phillips" will be released on October 11th 2013

The World's End
A few days ago we got our first look at the poster for this film and now we get our fist glimpse at Edgar Wright's "The World's End" which looks like another winner. Take a look

That's all for tonight, see ya back later

OH..."DAWN OF THE PLANET OF THE APES" began production today!

Posted by Shawn Hoelscher at 5:57 PM