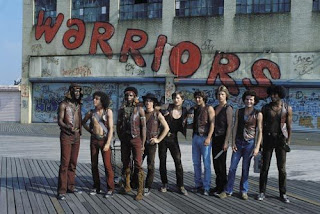 This is a quote from The Battle of Cuaxa from the Greco-Persian War during 401 B.C.. It opens Walter Hill’s “The Warriors”, an action satire that became a cult classic in the late 1970s. It was a film that was violent and controversial for its time. By today’s standards, it just looks like ridiculous fun.

Some film lovers don’t like having ridiculous fun. They like their movies to have logic and reason. Everything down to the smallest detail has to make sense and if it doesn’t, the film is automatically stupid. I have always been of the opinion that movies are an emotional response. Films are art, real, pure art. A movie does not have to come off “artsy” in order to be real art. Filmmakers, actors, screenwriters, are all artists. This is all my way of saying that I don’t mind ridiculous fun, just as long as a good story is told in the process.
“The Warriors” takes a very silly idea and has fun with it. If you are able to open your mind and disregard logic and reason, you will have a lot of fun with this film.

The film opens with nine members of “The Warriors,” a notorious gang from Coney Island, New York, meeting up with each other. They are planning to go to a huge gang meeting in Central Park of New York City. Cyrus is the host of this momentous occasion; he is the leader of The Riffs, the biggest gang in the city. Cyrus plans to unite all of the gangs in the city (which apparently number in the hundreds) into one gargantuan crime syndicate.  And why not? This super gang would outnumber the police and organized crime. Plus, they would not have to worry about defending their turf if the whole city belongs to everyone. Cyrus invited nine delegates from each gang of the city and makes them vow to not bring any weapons to the meeting.

The opening credit sequence showing The Warriors taking the subway to the meeting is one of my favorite scenes. There are so many colorful gangs, wearing goofy outfits that make their way to Central Park. This is what I mean by having fun with a silly idea. Obviously in today’s world, nothing like this would ever happen since gangland turf and racial tension are still very much alive in the streets. But seeing all the neat costumes and all these tough guys getting ready to potentially band together…it’s very electric and sets the tone right.
So as you could probably guess, Cyrus’s meeting goes horribly. As the police plan to crash the meeting, nobody (including the police) have any idea that somebody plans to assassinate Cyrus. Luther, the leader of The Rogues, kills Cyrus and put the blame upon “The Warriors.” The Riffs put a price on The Warrior's heads and now every gang in the city are after The Warriors. The Warriors have no choice but to get back Coney Island, anyway they can.

What follows is a sprawling action adventure as The Warriors make their way back to Coney, fighting wave after wave of gangs and police. But the movie never feels like a video game with checkpoints. There are little stories in between that keep you interested and invested in the characters. We learn about The Warriors as they go along too, well almost all of them. I can’t say that this movie shines in character development, but there is plenty of fun to go around.

There aren’t a whole lot of A-listers in this film. The most recognizable star is James Remar, who plays Ajax. You’ll recognize Remar from “Django Unchained”. He also plays Dexter's Dad in TV show “Dexter.” He is an aggressive, hot-headed gangster who really wants to lead the Warriors, but is obviously too tempered to do so. We see about 5 seconds of Lawrence Fishburne, who is seemingly a member of an unnamed gang. This was one of his very first appearances in front of the camera. All the actors do really well in their roles and should be noted for their work.

There is quite a bit of action in the film, but nothing offensive or outlandish. There is actually not any blood at all. If it weren’t for so much vulgar language, the film would have easily been a PG-13 rated movie. Still, the action is awesome and fight scenes are actually quite cool.

“The Warriors” didn’t bring buckets of money to the box office and it didn’t win any Oscars. But it is a landmark for taking a high concept and doing something fun with it. That is much harder to do than one may realize, and director Walter Hill makes it come off effortless. If you looking for nothing but a good time with a movie, then I strongly suggest you give “The Warriors” a shot. Can you dig it?

Posted by Shawn Hoelscher at 6:22 PM